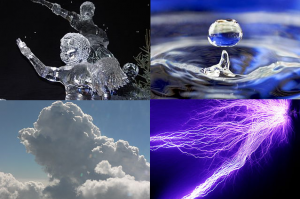 The four main states of matter are solids, liquids, gases, and plasma. (Spirit469)

Giving examples of solids, liquids, gases, and plasma is a common homework assignment in chemistry, physics, and physical science classes. Naming examples is a good way to start thinking about the properties of the states of matter.

A liquid is a state of matter that has a defined volume, but can change shape. Liquids have the ability to flow and assume the shape of their container. This is because there is enough space between particles that they can slide past each other. Examples of liquids include: 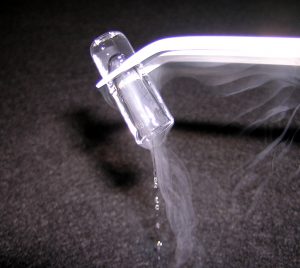 Argon can exist as a solid, liquid, and gas all at once. Temperature and pressure can change the state of matter. (Deglr6328)

A gas does not have a defined shape or volume, so it can expand to fill any size or shape of container. Particles in gases are widely separated, compared to those in liquids and solids. Examples of gases include:

Like a gas, plasma has no defined shape or volume. It can expand to fill a container. However, the particles in plasma are ionized (carry an electric charge) and very widely separated from each other. Examples of plasma include:

Other States of Matter

While solids, liquids, gases, and plasma are the most familiar states of matter, scientists are aware of several others. These include:

Transitions Between States of Matter

This is a summary of the phase changes between states of matter. (ElfQrin)

Changes in temperature and pressure cause matter to transition from one form to another. The most common phase transitions are: