Amino acids are organic compounds containing an amino group (-NH2) and a carboxyl group (-COOH). This is the general structure of an amino acid: 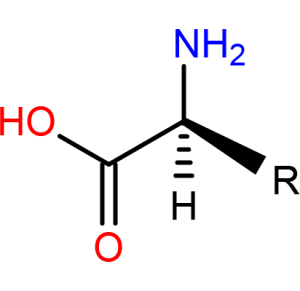 where R is the side chain functional group that distinguishes one amino acid from another.

This is a table of the 20 amino acids derived from proteins. The table contains the amino acid’s name, common abbreviation and symbol, linear structure and skeletal structure.

Amino acids are often grouped by the chemistry of the side chain. These groups are polar-uncharged, polar-charged and non-polar.

A downloadable study sheet of this information is available here.