Aluminum is the 13th element of the periodic table. These aluminum facts contain chemical and physical data along with general information and history. 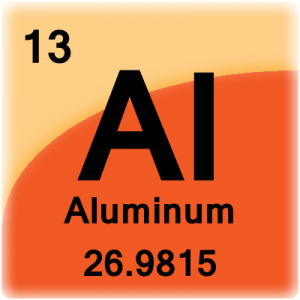 Alum was a commonly known substance since ancient times. Today, we know alum is potassium aluminum oxide. Around 1750, German scientist Andreas Marggraf separated a new metallic substance from alum and named the substance alumina. Alumina is aluminum oxide. Unfortunately for Marggraf, he could not separate aluminum from alumina. Sir Humphrey Davy came close with his electrolysis equipment in 1807, but his metal was a mixture of aluminum and iron. It wasn’t until Swedish chemist Hans Christian Ørsted isolated pure aluminum in 1825.

Name Origin: Sir Humphrey Davy coined the term aluminium to give the element suffix of -ium to alumina.

Spelling: In 1990, the IUPAC designated the spelling ‘aluminium’ as the official name of the 13th element. Three years later, they allowed the US spelling ‘aluminum’ as an acceptable variant.

Natural aluminum is comprised of two isotopes: 26Al and 27Al. Twenty radioactive isotopes have been produced under laboratory conditions ranging from 21Al to 42Al.

26Al
Aluminum-26 is a radioactive isotope containing 13 neutrons. Aluminum-26 decays by β+ decay into magnesium-26 with a half-life of 717,240 years. Only trace amounts of aluminum-26 appear in nature.

27Al
Aluminum-25 is the only stable isotope of aluminum and contains 14 neutrons. 100% of natural aluminum is aluminum-25. 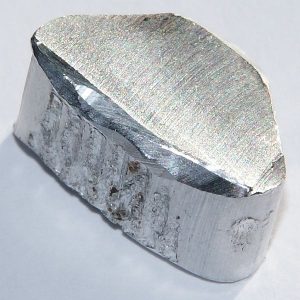 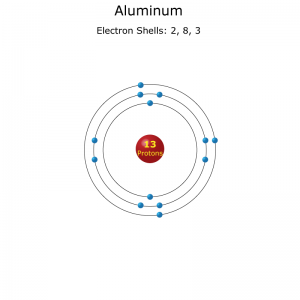