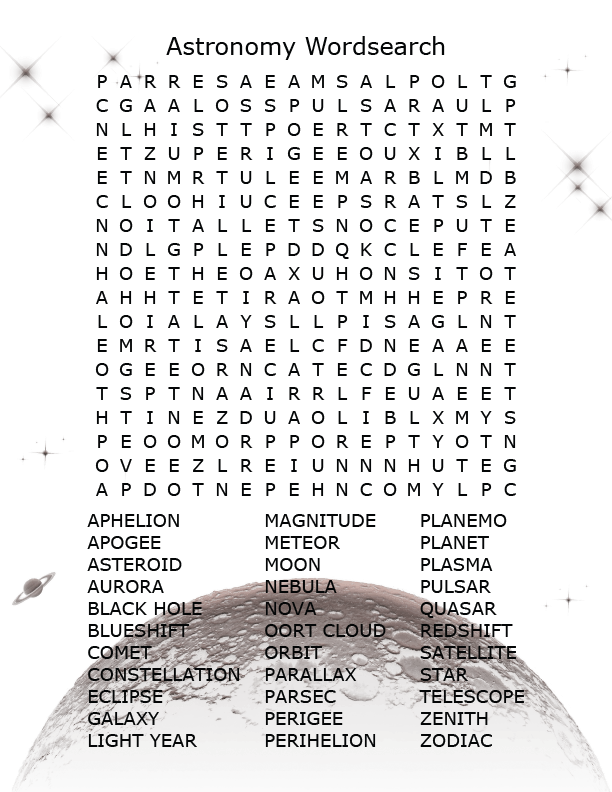 Find astronomy-themed words from the list in vertical, horizontal, and diagonal directions.

If you need a little help finding one or all of the astronomy terms, a solved version of the puzzle is available.

Aphelion: The part of an orbit of a celestial body where it is furthest from the Sun.

Apogee: The point of an object’s orbit where the distance between the object and the celestial body the object is orbiting is at its maximum.

Asteroid: A general term for a rocky body in orbit around the Sun smaller than a planet. Most asteroids are found orbiting between Mars and Jupiter.

Aurora: A display of colored streamers of light caused by interactions between charged particles and a planet’s magnetic field. These displays typically occur at the magnetic poles of the planet.

Black Hole: A region of space with extremely strong gravity forces strong enough to prevent light from escaping. They are believed to be formed when a massive star collapses at the end of its life.

Blueshift: A doppler shift in visible light towards the blue end of the spectrum from an object moving towards the observer.

Comet: A celestial body consisting of a nucleus of dust and ice in a highly eccentric orbit. As the comet approaches the Sun, the ice begins to melt and the solar wind blows a tail of dust and ice particles.

Galaxy: A large collection of stars held together by mutual gravitational attraction.

Meteor: A rocky body which enters the Earth’s atmosphere. Friction between the meteor and the atmosphere gives the appearance of a ‘shooting star’. Meteors that reach the surface of the Earth are meteorites.

Nebula: A cloud of interstellar dust and ionized gas. Nebulas are regions where new stars are formed or the remains of dying stars.

Nova: A stellar event which causes a “new star” (Latin: Nova) to appear in the night sky which dims over time.

Orbit: The path of a celestial body follows under the influence of gravitational forces from other celestial bodies.

Parallax: The difference in the apparent position of a distant object when viewed from two different lines of sight.

Perigee: The point of an object’s orbit where the distance between the object and the celestial body the object is orbiting is at its minimum value.

Perihelion: The part of an orbit of a celestial body where it is closest to the Sun.

Planemo: A celestial object not in orbit around a star.

Planet: A celestial body in orbit around a star large enough to be rounded by the force of its own gravity and cleared its orbit of other objects.

Plasma: A state of matter consisting of high energy ions and free electrons. The electrons have enough energy to not orbit any one particular atomic nucleus.

Quasar: An extremely distant stellar object believed to consist of massive black holes surrounded by an accretion disk of gas.

Redshift: A doppler shift in visible light towards the red end of the spectrum from an object moving away from the observer.

Satellite: An object in orbit around a larger body. The Moon is a natural satellite of Earth.

Star: A celestial body of luminous gas and plasma held together by its own gravity.

Telescope: A scientific instrument used to aid the observation of electromagnetic radiation from distant objects.

Zenith: Any point directly above the observer.

Zodiac: The belt region of space in the night sky containing the paths of all the planets, the Moon and the Sun. This belt is divided into 12 equal regions and named for the nearest constellation in the region.