The Atwood Machine is a common classroom experiment showing the laws of motion of two coupled systems undergoing constant acceleration. An Atwood Machine consists of two masses mA and mB, coupled together by a inextensible massless string over a massless pulley. When the two masses are equal, the system is in equilibrium and no motion occurs. The two masses will remain stationary. When the two weights are not equal, the system will move where the heavier mass is pulled down while the lighter mass is pulled up. This example problem shows how to derive the acceleration of the system and the tension in the string.

Problem:
a) Find the acceleration of an Atwood Machine if mA = 3 kg and mB = 5 kg.
b) Find the tension in the string connecting the two masses.

Here is an illustration of the setup. 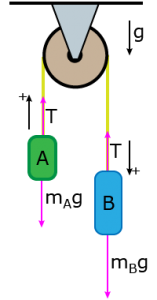 We will ignore the values of mA and mB at this point to show the derivation of the answer. Block B is heavier than Block A, so the overall direction of motion will be down on Block B’s side of the pulley and up on Block A’s side. Choose your coordinate system so the acceleration is always positive.

This system is coupled together by the massless string. The heavier Block B pulls down on the string a distance Δd in some time t. In the same time, Block A moves up Δd. That means each block’s velocities are the same.

The velocity directions can be adjusted by the coordinate system chosen for each system. Since the velocities are always the same, their accelerations are the same.

This means the acceleration and tension is the same for both blocks. Now find the forces acting on each block.

For Block A, the weight mAg is pulling down while the tension force T is pulling up.

For Block B, the forces are nearly the same. The difference is the overall acceleration is in the opposite direction of Block A.

Factor out the acceleration and gravity variables on each side.

Now that we have the acceleration, we can find the tension using either of the two force equations. Let’s use Block A.

Solve this for T and get:

Substitute the value of a into the equation.

Rewrite the equation as

Now that we have derived formulas for acceleration and tension, we can find the answer to the initial problem.

Part b) Find the tension in the string.

Tip: The key to this type of problems is to choose your coordinate system so the direction of the acceleration is always in the positive direction. As long as your accelerations are all acting together, sign errors will not be a problem. In the case of the Atwood machine, acceleration always runs towards the larger mass.