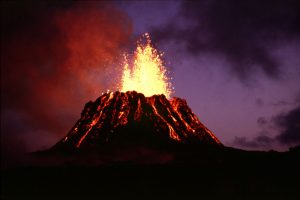 You know you can make a baking soda and vinegar volcano to simulate a volcanic eruption or you can use other ingredients like yeast and peroxide or citric acid and baking soda, but have you considered how the cooking of a souffle is a volcano simulation?

While the bubbles formed by the chemical reactions used to make ‘volcanoes’ behave somewhat like magma and gases, a souffle probably is a better simulant because the egg whites of a souffle harden sort of like lava hardens into rock. Lava can be foamy as the gases in magma come out of solution, forming bubbles of steam, carbon dioxide, and other gases. When a souffle is cooked, the air bubbles and steam trapped by the egg expand, causing the souffle to rise. When the gas bubbles form in magma expand, they can forcefully bubble the magma up so that it erupts as lava. If a souffle overflows its dish, you get a foamy mess that rolls down the side of the pan and eventually hardens as the egg cooks. When lava erupts from a volcano, it can cascade down the side of the cone, with the lava hardening into rock.

Are you ready to try out an edible chemical volcano? Here’s a chocolate volcano souffle recipe. It’s a little more complicated than mixing baking soda and vinegar, but it tastes a whole lot better, so it’s worth the trouble.