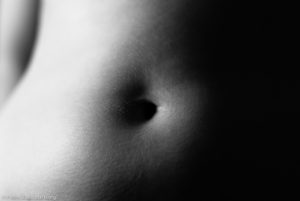 The smoother your skin and flatter your belly, the less likely you are to get belly button lint. (Pietro Zuco)

Whether you call it belly button lint, navel fluff, or navel lint, if you find a furry little ball in your belly button, you’ve got it! Doctors and scientists have examined the fluff balls, so their cause, composition, and potential health risks are known.

The Cause and Composition of Belly Button Lint

In 2002, Sydney University’s Dr. Karl Kruszelnicki won an Ig Nobel prize for his internet research into belly button lint. He collected data from 4799 survey respondents, including their weight, whether their navels were “innies” or “outies,” and the type of washing machine they used. He examined samples of belly button lint under an electron microscope to analyze its composition and properties.

Dr. Kruszelnicki found navel fluff consists of body hair, clothing fibers, and skin cells. Its most common color is blue-gray, similar to dryer lint, because that’s the most common clothing color. However, skin tone also plays a role in lint color. Light-skinned people have paler lint than dark-skinned people. Women, on average, get less navel lint than men because they tend to have less body hair. Slender women who wear skin-tight clothing tend to get more lint because their clothes rub against the navel. Slightly overweight, hairy men accumulate the most lint because they have hair to contribute to the mix and because a slight paunch rubs against clothing fibers, allowing them to collect. Extremely hair people actually don’t get more belly button link, presumably because the hair blocks lint from entering the navel. Anecdotal evidence suggests wearing a navel ring reduces accumulation of lint. If you have an “outie,” you’re less likely to get lint than if you have an “innie.”

Other scientists have expanded the composition of belly fluff to include lotion residue, soap, perspiration, dirt, and bacteria. According to research conducted at North Carolina State University, at least 67 types of bacteria call the human navel home.

How to Remove Belly Button Lint 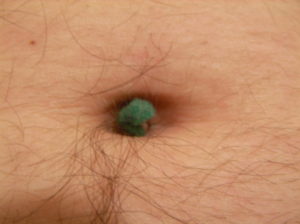 The color of belly button lint relates to your clothing color. (Matt Smith)

Dr. Kruszelnicki concluded navel lint was harmless. However, most health professionals recommend regularly cleaning your navel because the bacteria-laden lint can stink, lead to an infection, or (rarely) form a nasty stone-like mass called an omphalith or umbolith that requires medical care to remove.

What if you never want to see belly button lint ever again? There are some steps you can take: