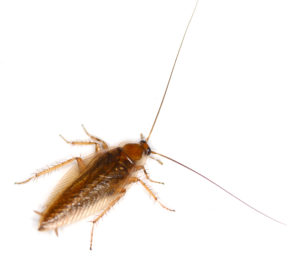 Cockroaches survive radiation better than humans, but they are not immune to the heat of an atomic bomb. (Amada44)

Cockroaches seem pretty indestructible, at least compared to us puny humans. They can live for a week without a head, survive a month without food, and appear unaffected inside an operating microwave oven. While it’s true the insects can survive harsh environments, can they really live through the detonation of a nuclear bomb? The answer is yes… and no. Let me explain:

The Radiation Resistance of a Cockroach

In the aftermath of the atomic bombs dropped on Hiroshima and Nagasaki, living cockroaches were found in the rubble. However, there were also human survivors of these nuclear attacks. There is hard evidence both cockroaches and people can survive a nuclear bomb, at least at first.

MythBusters and the Discovery Channel set up an experiment to see just how much radiation a cockroach can withstand. The species selected for their small study was the German cockroach, the type that infests human homes. They exposed the cockroaches to three radiation doses from cobalt-60 for a month: 1000 rads, 10,000 rads, and 100,00 rads. To put this in perspective, the gamma rays released by the Hiroshima bomb were about 10,000 rads.

Not Many Cockroaches Survive an Atomic Bomb

While humans, cockroaches, and other creatures may survive the initial detonation of an atomic bomb, they don’t survive at Ground Zero and they might not live for long. At ground zero, cockroaches and humans get blasted by heat to the tune of 10 million degrees Celsius. Even 50 meters away, temperatures hit 10,000 degrees. Only creatures far enough away from the blast have a chance of survival. The survivors face genetic damage from the initial exposure and ongoing harm from radioactive fallout. Once again, roaches fare better than people because they produce so many offspring. If their fertility is impaired, fewer roaches might hatch, but there’s a good chance some will make it.

The most plausible reason for the radioresistance of cockroaches is that their cell cycles are slower than those of humans. Cells are more susceptible to radiation damage when they are dividing. The cells of a cockroach divide once before the animal molts, which happens about once a week. In contrast, there is always some percentage of human cells dividing at any given time. If a group of cockroaches was blasted with radiation, only some of the animals would be in the vulnerable molting phase.

Other Animals That Survive Radiation

People have known insects resist radiation better than people since the early 20th century. In 1919, Dr. W.P. Davey found a dose of 60 rads of x-radiation actually caused flour beetles to live longer. The experiment was repeated and confirmed in 1957 by Dr. J.M. Cork.  In the same year, Drs. Wharton and Wharton found 1000 rads interfered with cockroach fertility (about the dose found 20 kilometers from Hiroshima Ground Zero) and 6400 rads killed 93% of immature German cockroaches. In other words, German cockroaches are only about 6 to 15 times more radioresistant than humans! The Whartons found a dose of 64,000 rads was required to kill fruit flies and 180,000 rads (1800 grays) to kill the wasp species Harbobracon. A team led by D.D. Horikawa found the tardigrade or water bear could survive 5000 grays.

Tardigrades not only resist radiation like a boss, but they can survive temperatures down to -200 degrees and over 300 degrees Celsius and pressure up to 6 times the highest pressure of the ocean and down to the vacuum of space. While many people think cockroaches would inherit the Earth in the event of a nuclear war, it could really be tardigrades!

Also, don’t forget about bacteria. The bacterium Deinococcus radiodurans has been known to survive over 1.5 million rads of radiation. If a culture of the bacteria is frozen, it withstands twice that dose.