Home » Science Notes Posts » How Stuff Works » Is a Car Really a Safe Place to Be When Lightning Strikes? 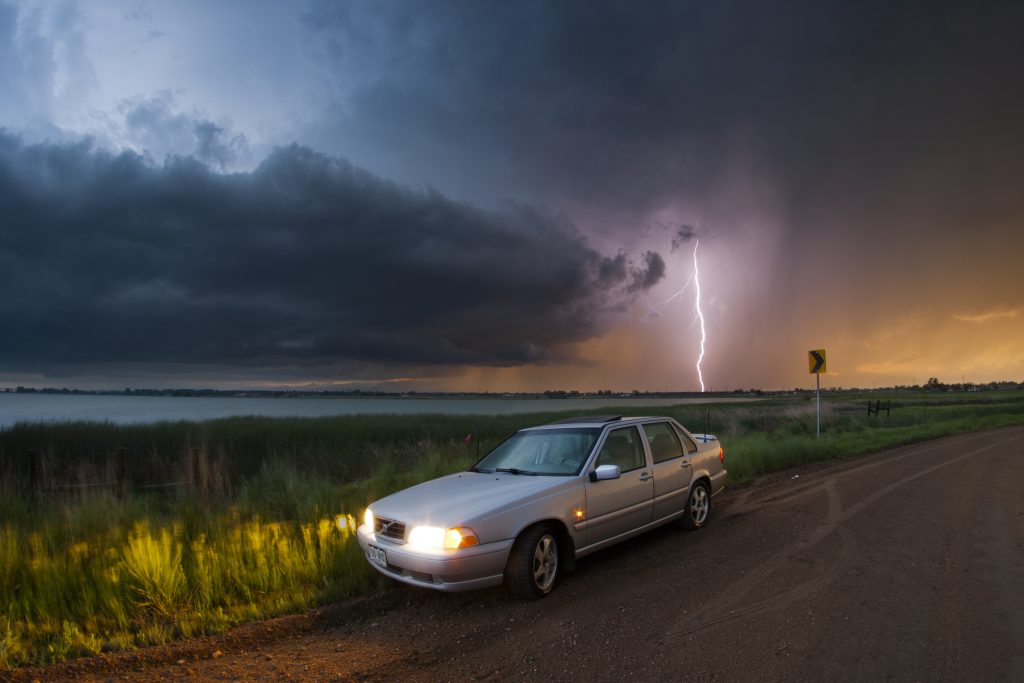 Being in a car with a metal body and the windows rolled up gives you some protection if lightning strikes the vehicle. Photo Credit: Bryce Bradford

You’ve probably heard it’s safe to be in your car during a thunderstorm because you won’t get hurt if lightning strikes the car. Are you really safe? Yes and no.

First off, while many people think it’s the rubber tires that protect a car from lightning, it’s actually a myth. Yes, the tires are electrical insulators, but (a) lightning packs a serious punch and even insulators conduct electricity if there’s enough of it and (b) the insulating ability only gives the tires some protection, not the car itself. Bottom line: tires don’t protect you from lightning.

A Metal Body Protects You from Lightning Strikes

If your vehicle is made of metal, it actually does protect you from lightning. The car needs to have a metal roof, so the electricity can spread across the exterior of the vehicle without zapping the occupants. The metal body acts as an imperfect Gaussian sphere or Faraday cage. Some people call it the “skin effect”, where the electricity chooses the path of least resistance around the vehicle rather than through it. The glass of the windshield and windows is an insulator, so it also confers some protection.

However, the protection diminishes if you have a window down, plus there’s a good chance a lightning strike will fry the electronics, potentially causing a fire. It’s also possible for the vehicle airbags to deploy. The National Lightning Safety Institute has statistics on the effects of a vehicle strike. The best case scenario is that nothing happens to either you or your car. The worst case scenario is that both you and your car suffer fatal damage from the zap. Yes, people have died inside vehicles struck by lightning!

A Nonmetal Body Does Not Protect You

Do you drive a convertible, Corvette, or other vehicle without a metal roof? Don’t expect your car to save you if it’s struck by lightning. There’s not enough metal to protect you!

The safest place for you and your car is inside your home and garage, but it’s not always possible to get there during a storm.

One thought on “Is a Car Really a Safe Place to Be When Lightning Strikes?”