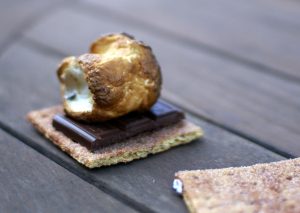 The toasted part of a marshmallow has been carmelized. (John Lustig)

Carmelization is one of the food browning processes, used to give foods a desirable color, flavor, and texture. It is also a process responsible for a burnt sugar flavor or blackening of food.

Note fructose has a lower carmelization point than other sugars. Baked goods made using fructose brown more readily than those made using other sugars and often end up darker in color.

Carmelization is a process and not a single chemical reaction. As it occurs, water is removed from the carbohydrate. Isomerization and polymerization then take place. This is seen as melting, boiling, foaming, and darkening of sugar.

Carmelization is used to make candies, caramel, ghee, carmelized onions, and carmelized potatoes, among other foods. Foods that contain both carbohydrates and proteins brown from a combination of carmelization and the Maillard reaction.

How Carmelization Works in Sugar

Regular table sugar or sucrose is the best-studied carbohydrate for the carmelization process. It proceeds in the following manner:

Carmelization products have different flavors from each other. Here are some common compounds:

Diacetyl: Diacetyl forms during the first stages of caramelization. Diacetyl contributes a buttery or butterscotch flavor.
Hydroxymethylfurfural (HMF): Hydroxyacetylfuran (HAF) has a sweet aroma and flavor. Other furans have a nutty flavor.
Maltol: Maltol is the compound associated with the toasty flavor and aroma of freshly baked bread.
Esters and Lactones: These compounds have a sweet flavor, reminiscent of rum.