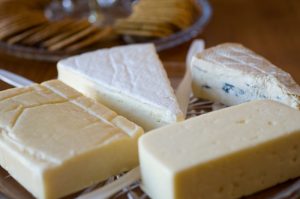 The word casein comes from the Latin name for cheese. (Andrew Blight)

Casein is the name given to a group of related proteins found in mammalian milk. The word “casein” comes from the Latin word caseus, which means “cheese”, which makes sense since casein is one of the main chemical substances in cheese. Cheese is made by coagulating casein, typically by acidifying milk and adding the enzyme rennet to coagulate protein. Casein is also used as binder to make safety matches, as a food additive (protein supplement), to make a quick-drying water-soluble paint, for glue and plastics, and to remineralize tooth enamel.

Casein makes up 80% of the proteins found in cow’s milk and 20%-45% of the proteins in human milk. These proteins are all phosphoproteins, which contain a high number of proline residues (an amino acid) and no disulfide bridges. The protein is poorly soluble in water, found in milk as a suspension of particles that are termed “casein micelles”. The micelles are considered colloidal particles.

A small percentage of people are allergic to casein and should avoid it, but most of the negative press the protein receives relating to health is unfounded. Research into a suspected link between milk consumption and cancer has shown casein cannot be identified as a causative chemical. Early studies linking chronic diseases and the A1 or A2 beta casein genetic variants have not been substantiated by modern research.