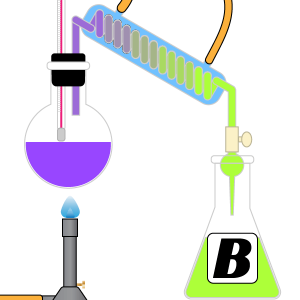 bactericide – A bactericide is a substance that kills bacteria.
Also known as: bacteriocide

bainite – Bainite is a Fe-C composition which consists of a fine dispersion of cementite in alpha-ferrite. Bainite is an austenitic transformation product that forms at temperatures between those at which the pearlite and martensite transformations occur.

balanced equation – An equation for a chemical reaction in which the number of atoms for each element in the reaction and the total charge is the same for both the reactants and the products. In other words, the mass and the charge are balanced on both sides of the reaction.
Also known as: Balancing the equation, balancing the reaction, conservation of charge and mass.

Balmer series – The Balmer series is the portion of the emission spectrum of hydrogen that represents electron transitions from energy levels n > 2 to n = 2. These are four lines in the visible spectrum.
Examples: The four visible Balmer lines of hydrogen appear at 410 nm, 434 nm, 486 nm and 656 nm.

barium – Barium is the name for the alkaline earth element with atomic number 56 and is represented by the symbol Ba.

barometer – A barometer is a device that measures atmospheric pressure.

base catalysis – Base catalysis is a chemical reaction that requires the presence of a base to act as a catalyst to proceed.

base promoted – Base promoted refers to a chemical reaction that needs a base to proceed but does not act as a catalyst for the reaction. Reactions needing a base and act as catalysts are called base catalysis reactions.

battery – A battery is a series of electrochemical cells using redox reactions to provide a source of electric current.

battery acid – Battery acid is any acid that can be used in a chemical cell or battery. The common use of the term battery acid refers to the acids used in lead-acid batteries for motor vehicles. Automotive battery acid is 30-50% sulfuric acid (H2SO4) with water. The acid typically has a mole fraction of 29-32%, concentration of 4.2-5.0 mol/L, a density of 1.25-1.28 kg/L and a pH of approximately 0.8.

BCC – Body centered cubic or BCC refers to a crystal structure in which atoms are located at the corners of a cubic cell with one atom at the cell center position.

Beer-Lambert law – Beer’s Law is an equation that relates the attenuation of light to properties of a material. The law states the concentration of a chemical is directly proportional to the absorbance of a solution. Beer’s Law is written as:
A = εbc
where A is absorbance (no units)
ε is the molar absorbtivity with units of L mol-1 cm-1 (formerly called the extinction coefficient)
b is the path length of the sample, usually expressed in cm
c is the concentration of the compound in solution, expressed in mol L-1
The Beer-Lambert law does not hold at high concentration.

Beer’s law – Beer’s law is a short name for the Beer-Lambert law. See definition above.

benzyne – In organic chemistry: an unstable intermediate species consisting of a benzene ring with an adjacent chemical bond created by the side-to-side overlap of the sp2 orbitals on the adjacent carbon atoms of the ring.

berkelium – Berkelium is the name for the actinide element with atomic number 97 and is represented by the symbol Bk.

beryllium – Beryllium is the name for the alkaline earth element with atomic number 4 and is represented by the symbol Be.

bidentate – Bidentate refers to a coordination complex where two ligands can attach itself to a central atom.
Also known as: didentate
Example: Ethylenediamine is a bidentate ligand. The ligand can attach to a central atom at either of the unpaired electrons on the nitrogen atoms.

bimolecular – Bimolecular refers to an elementary chemical reaction that occurs when two reactant molecules collide with each other.

binary acid – A binary acid is a binary compound where one element is hydrogen and the other is a nonmetal.
Examples: Hydrochloric – HCl, hydrofluoric – HF and hydroiodic – HI are all binary acids.

binding energy – Binding energy is the energy required to either separate an electron from an atom or to separate the protons and neutrons of an atomic nucleus.

biochemistry – Biochemistry is the chemistry of living things. It is concerned with the structure and chemical processes of proteins, carbohydrates, lipids, nucleic acids and other molecules found in or produced by organisms.

biocide – A biocide is a substance or microorganism that kills or controls the growth of living organisms.
Examples: Antibiotics, pesticides, and antibacterials are all types of biocides.

biology – Biology is the scientific study of life. Biology involves the study of living organisms and how they relate to their environment. Fields of biology include botany, zoology, microbiology, biochemistry, genetics, molecular biology, cellular biology, physiology, and ecology.

bismuth – Bismuth is the name for the metal element with atomic number 83 and is represented by the symbol Bi.

bitumen – Bitumen is a naturally occurring mixture of polycyclic aromatic hydrocarbons. The mixture takes the form of a viscous, black, sticky tar-like substance. It can be refined from crude oil by fractional distillation.
Examples: Asphalt is a mixture of an aggregate and bitumen and is commonly used as a road surface. Bitumen is also what makes up the La Brea Tar Pits.

black lead – Black lead is an alternate name for the graphite allotrope of carbon.
Also known as: graphite, blacklead
Example: Black lead is the substance found in most pencils.

black light – A black light is a lamp that emits electromagnetic radiation primarily in the soft near ultraviolet range. A black light emits very little visible light, hence its name.

bohrium – Bohrium is the name for the transition metal element with atomic number 107 and is represented by the symbol Bh.

boiling – Boiling is the name for the phase transition from the liquid phase to the gas phase.
Also known as: ebullition

bond – A bond in chemistry is an electrostatic link between atoms in molecules and between ions and molecules in crystals.

bond angle – Bond angle is the angle that is formed between two adjacent bonds on the same atom.
Example: The bond angle between the hydrogen bonds in water is 104.5°.

bond energy – Bond energy is the amount of energy required to break apart a mole of molecules into its component atoms.

bond length – Bond length is the equilibrium distance between the nuclei of two groups or atoms that are bonded to each other.

boron – Boron is the name for the metalloid element with atomic number 5 and is represented by the symbol B.

brass – Brass is defined as an alloy of copper and zinc.

brimstone – Brimstone is an old name for the element sulfur.

bromination – Bromination is a chemical reaction where a bromine atom is integrated into a molecule.

bromine – Bromine is the name for the halogen element with atomic number 35 and is represented by the symbol Br.

bronze – Bronze is an alloy of copper, usually containing tin as its main addition.

BTU – BTU is the abbreviation for the British Thermal Unit. See definition above.

buffer – A buffer is a solution containing either a weak acid and its salt or a weak base and its salt, which is resistant to changes in pH.

butter – Butter is a deprecated chemical term for inorganic chlorides.
Examples: Butter of tin is SnCl4. Butter of zinc is ZnCl2.

butter of bismuth – Old name for bismuth trichloride or BiCl3.

butter of zinc – Old chemistry term for the compound zinc chloride or ZnCl.