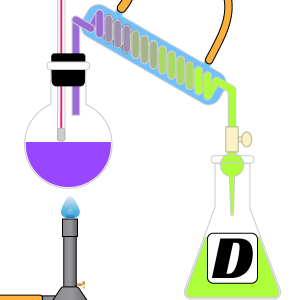 D- (prefix) – D- is a prefix added to a enantiomer name that has dextrorotatory properties.

Dalton’s Law – Dalton’s Law states the total pressure of a mixture of gases is equal to the sum of the partial pressures of the mixture’s component gases.

darmstadtium – Darmstadtium is the name for the transition metal element with atomic number 110 and is represented by the symbol Ds. Darmstadtium was formerly known as ununnilium with symbol Uun.

data – Data is any representation to which meaning can be attached.
Also known as: information
Examples: Characters, numbers, measurements, and words are all data.

dative bond – A dative bond is a covalent bond between two atoms where one of the atoms provides both electrons that form the bond.
Also known as: coordination bond, dipolar bond

daughter atom – A daughter atom refers to the atom that is the product atom formed during the radioactive decay in a nuclear reaction.
Also known as: daughter isotope
Example: When U-238 decays into Th-234, the daughter atom is Th-234.

daughter isotope – Another term for daughter atom. See definition above.

DC or D/C – DC is an acronym for direct current. Direct current refers to a system where current flows in a single direction only.

deaeration – Deaeration is a process where dissolved gasses are removed from a solvent.

de Broglie Equation – The de Broglie equation is an equation used to describe the wave properties of matter. The particle’s wavelength is expressed by the equation
λ = h/mv
where λ is wavelength, h is Planck’s constant, m is the mass of a particle, moving at a velocity v.

Debye – A Debye is a cgs unit for dipole moments. The Debye unit is a defined unit. 4.8 Debye is equal to the dipole moment created when two oppositely charged charges with a magnitude of one electron are separated by one angstrom.
1 Debye (D) = 3.338 x 10-30 Coulomb meters.

deca – Deca is the prefix associated with x10 and is denoted by the symbol da. It is rarely used in metric measurements.

decantation – Decantation is a process to separate mixtures. Decanting is done to separate particulates from a liquid by allowing the solids to settle to the bottom of the mixture and pouring off the particle-free part of the liquid. Another method is to allow two immiscible liquids to separate and the lighter liquid is poured off.

decarboxylayse – A decarboxylase is a lyase which catalyzes a reaction to add or remove a carboxyl group (-COOH) from a compound.
Also known as: carboxy-layse

deci – Deci is the prefix associated with x10-1 and is denoted by the symbol d.
Example: A regular can of soda contains 3.5 dL of soda or 350 milliliters.

decoction – Decoction is a process of extracting oils and other compounds from plant material. The material is first crushed or otherwise broken down, then added to water and boiled. After boiling, any remaining material is filtered out, leaving the desired compounds in the water.
Decoction also refers to the remaining liquid from this process.

deflagration – Deflagration is the chemical process where a substance rapidly and intensely burns. This process is generally faster than combustion but slower than a detonation.
Example: Adding water to burning oil can cause a deflagration. The water rapidly boils to create steam and forces oil droplets to be ejected into the flames adding fuel to the fire.

delta bond or δ bond – A delta bond (δ bond for short) is a covalent bond formed from the overlap of four d orbitals between two atoms. Delta bonds are observed in organometallic compounds.

denature – Denature is the process of altering the natural qualities or removing a characteristic component of a substance. Denature also means to make alcohol unsuitable for consumption by adding unpleasant flavors or toxic chemicals.

density – Density is the measurement of the amount of mass per unit volume.
Example: The density of pure water is 1 gram/cm3.

deposition – Deposition is the settling of particles or sediment onto a surface. The particles may originate from a vapor, solution, suspension, or mixture.

desalination – Desalination is a process to remove salts and minerals from water.

desiccant – A desiccant is a drying agent or a chemical species which picks up water molecules.

detonation – Detonation is an extremely rapid exothermic chemical process where combustion is driven by the energy shock wave produced by the reaction.
Also known as: explosion

deuteride – A deuteride is the anion of the hydrogen isotope deuterium: 2H–.

deuterium – Deuterium is one of the heavy isotopes of hydrogen, with one neutron: 2H1.

deuteron – A deuteron is the nucleus of the hydrogen isotope deuterium.

deuteronation – Deuteronation is a chemical reaction that involves the transfer of a deuterium cation or deuteron to a molecule.
Example: The reaction
(CH3)2C=O + [D3O]+ → [(CH3)2C=OD]+ + D2O
is the deuteronation of acetone.

dextrorotatory – Dextrorotatory refers to the property of plane polarized light rotating in a clockwise direction with respect to the light approaching the viewer. Dextrorotatory enantiomers are generally denoted with a D- prefix.

diamagnetic – Diamagnetic is a term which indicates that a substance contains no unpaired electrons and thus is not attracted to a magnetic field.
Example: NH3 is diamagnetic because all of the electrons in NH3 are paired.

diastereomer – Diastereomers are stereoisomers that are not enantiomers or mirror images of each other.

diatomic – Diatomic refers to a molecule containing only two atoms.
Examples: Carbon monoxide (CO) is a diatomic molecule. H2 is a diatomic element.

didymium – Didymium is a mixture of the elements neodymium and praseodymium that was originally thought to be a single element.

diene – A diene is a hydrocarbon that contains two carbon-carbon double bonds.
Example: Isoprene is a diene.

diffusion – Diffusion is the movement of a fluid from an area of higher concentration to an area of lower concentration. Diffusion is a result of the kinetic properties of particles of matter. The particles will mix until they are evenly distributed.
Example: H2S(g) in a test tube will slowly diffuse into the air of a lab until equilibrium is reached.

dilatometer – A dilatometer is a piece of laboratory equipment designed to measure changes in volume caused by chemical reactions or physical processes.

dilute – Dilute refers to a solution containing a relatively small quantity of solute as compared with the amount of solvent. This term is the opposite of ‘concentrated’.

dilution – Dilution is the process of adding a solvent to a solution to lower its concentration.

dimer – A dimer is a polymer made up of two mer subunits bonded together.

diol – A diol is a molecule that contains two hydroxyl groups (-OH).
Also known as: glycol

dioxygenyl – Dioxygenyl is a polyatomic cation with molecular formula O2+. Dioxygenyl ions are formed by the removal of a single electron from O2.

dipolar bond – A dipolar bond is a covalent bond between two atoms where one of the atoms provides both electrons that form the bond.
Also known as: coordination bond, dative bond

dipole – A dipole is a separation of electrical charges. In chemistry, a dipole refers to the separation of charges within a molecule between two covalently bonded atoms.

diprotic acid – A diprotic acid is an acid that can donate two protons or hydrogen atom per molecule to an aqueous solution.
Examples: Sulfuric acid (H2SO4) is a diprotic acid.

direct proportion – Direct proportion is the relationship between two variables when their ratio is equal to a constant value. As one variable increases, the other variable decreases.
Example: The volume of an ideal gas is directly proportional to the absolute temperature of the gas (Charles’ Law).

dissolve – Dissolve is the process of passing a solute into a solution.

distillate – A distillate is the vapor in a distillation process that is collected and condensed into a liquid.

distillation – Distillation is the technique of heating a liquid to create vapor which is collected when cooled separately from the original liquid.
Example: Pure water can be separated from salt water through distillation. Salt water is boiled to create water steam, but the salt remains in the solution. The steam is collected and allowed to cool into salt-free water.

divalent – Divalent is an ion or molecule with valence of 2.
Also known as: bivalent

DOT number – The DOT number is a number assigned by the United States Department of Transportation to identify a hazardous or flammable chemical. This number appears on a placard attached to the container along with any hazard ratings.
Also known as NA Number

double bond – A double bond is a bond where two electron pairs are shared between two atoms. Double bonds are drawn as two parallel lines in chemical structure diagrams.
Example: Ethylene (C2H4) is a hydrocarbon with a double bond between the two carbon atoms.

drug – A drug is a chemical that has medicinal, performance-enhancing or intoxicating effects when introduced into the body of a human or other animals. Substances which are foods are not considered to be drugs, although active ingredients from foods make be purified for use as drugs. Also, some chemicals used as drugs are identical to substances made in the body (e.g., insulin, testosterone). The chemical is considered a drug only if it is introduced into the body from the outside, such as by ingestion, injection or topical application.

dry cell – A dry cell is an electrolytic cell that uses a slightly moist electrolyte paste as a salt bridge.
Example: Household batteries are dry cells.

dry ice – Dry ice is a common name for carbon dioxide in its solid state.

dubnium – Dubnium is the name for the transition metal element with atomic number 105 and is represented by the symbol Db.

ductile – Ductile is a physical property of a material associated with their ability to be hammered thin or stretched into wire without breaking.

ductility – Ductility is another term for ductile. See definition above.

dyne – Dyne is the CGS unit of force. One dyne (dyn) is equal to the force necessary to accelerate a one gram mass by one centimeter per second.

dysprosium – Dysprosium is the name for the lanthanide element with atomic number 66 and is represented by the symbol Dy.