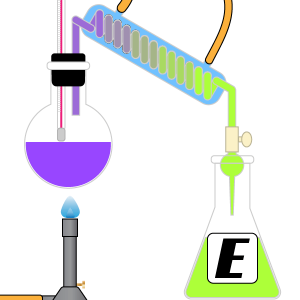 earths – Earths is an alchemical and old chemical term for compounds were thought to be elements but were later discovered to be metal oxides.

ebullition – a phase transition from the liquid state to the gas state, usually occurring when a liquid is heated to its boiling point.
Also known as: boiling
Example: Boiling is seen when water is heated until it forms steam

effervescence – Effervescence is the foaming formed as a result of a gas being evolved from a solid or liquid.

efflorescence – Efflorescence is the process of losing the water of hydration from a hydrate compound.

effusion – Effusion is the movement of a gas through a pore or capillary into another gaseous region or into a vacuum.

Einstein’s equation – the relation ΔE = Δmc2, relating energy and mass changes, where E is energy, m is mass, and c is the speed of light.

einsteinium – Einsteinium is the name for the actinide element with atomic number 99 and is represented by the symbol Es.

elastic – A substance is elastic if substance returns to its original shape after being deformed.

elasticity – Elasticity is a physical property of a material where the material returns to its original shape after being deformed.

elastic limit – Elastic limit is the maximum amount of force that can be applied to a substance before it is no longer elastic.

elastomer – An elastomer is a polymer that can be stretched and returns to its original shape without permanent deformation.
Example: Natural rubber is an elastomer.

electric field – An electric field is a field around charged particles and changing magnetic fields which exert a force on charges within the field. Electric field is defined as the electrical force expressed on a stationary positive charge.

electrode – An electrode is a general term applied to the either the anode or cathode of an electrochemical cell.

electrolysis – Electrolysis is the passage of a direct electric current through an ion-containing solution. Electrolysis produces chemical changes at the electrodes.

electrolyte – A substance which forms ions in an aqueous solution.
Examples: NaCl forms Na+ and Cl– in water.

electron – An electron is a negatively charged component of an atom. Electrons exist outside of and surrounding the atom nucleus. Each electron carries one unit of negative charge and has a very small mass as compared with that of a neutron or proton.

electron-sea model – The electron sea model is a model of metallic bonding in which cations are considered to be fixed points within a mobile ‘sea’ of electrons.

electron spin – Electron spin is a property of an electron that is loosely related to its spin about an axis. Two electron spin states are allowed, which are described by the quantum number ms, with values of +½ or -½.

electrophile – An electrophile is an atom or molecule that accepts an electron pair to make a covalent bond.
Also known as: Lewis acid
Examples: H+ is an electrophile. It can accept a pair of electrons from the Lewis base OH– to form H2O.

electroplating – Electroplating is a process where a coating of metal is added to a conductor using electricity via a reduction reaction. When a current is applied to the conductor to be coated, metal ions in solution are reduced onto the electrode to form a thin layer.

element – A chemical element is a substance that cannot be broken down by chemical means. Elements are defined by the number of protons they possess.

element symbol – Element symbol refers to the one- or two-letter abbreviation for a chemical element, though the term can be applied to the alchemical symbols as well.
Examples: H for hydrogen, He for helium, Ca for calcium

embrittlement – Embrittlement is the loss of ductility through a chemical or physical change. Example: Freezing fruit with liquid nitrogen is an example of embrittlement.

emulsion – An emulsion is a colloid of two or more immiscible liquids where one liquid contains a dispersion of the other liquids.
Example: Oil and water mixtures are emulsions when shaken together. The oil will form drops and disperse throughout the water.

enantiomer – An enantiomer is one of a pair of optical isomers.
Example: The central carbon in serine is the chiral carbon. The amino group and hydrogen can rotate about the carbon, resulting in two enantiomers of serine: L-serine and D-serine.

endergonic – Endergonic refers to a chemical reaction where the free energy of the system increases. Endergonic reactions absorb energy from their surroundings and are not spontaneous.

enediol – An enediol is an alkene enol with a hydroxyl group attached to both carbon atoms of the carbon double bond.

energy – Energy may be defined as the ability to do work. It is a scalar physical quantity. Although energy is conserved, there are many different types of energy, such as kinetic energy, potential energy, light, sound, and nuclear energy.

enolate – An enolate is an anion formed when a hydrogen atom is removed from the hydroxyl group of an enol.

enriched uranium – Enriched uranium is a sample of uranium where the abundance of the isotope U-235 is increased above the natural abundance. Examples: Nuclear reactors need U-235 to produce a controlled nuclear chain reaction. Natural uranium contains only 0.7% U-235. Nuclear reactor fuel is typically enriched to contain approximately 5% U-235.

entropy – The measure of the disorder of a system, usually denoted by the letter S. A highly ordered system has low entropy.

enzyme – An enzyme is a protein that functions as a catalyst for a chemical reaction.

equilibrium – Equilibrium is the state of a reversible reaction where the forward reaction rate is equal to the reverse reaction’s rate.

erbium – Erbium is the name for the lanthanide element with atomic number 68 and is represented by the symbol Er.

essential oil – An essential oil is a concentrated liquid containing the aroma compounds or terpenes of a plant.

ether – An ether is an organic compound that contains two alkyl or aryl groups by an oxygen atom. The general formula for an ether is R-O-R’.
The compound dimethyl ether is commonly known as ether.

europium – Europium is the name for the lanthanide element with atomic number 63 and is represented by the symbol Eu.

exa – Exa is the prefix associated with 1018 and is denoted by the symbol E.

excited state – Excited state refers to an atom, ion or molecule with an electron in a higher energy level than its ground state.

exergonic – Exergonic refers to a chemical reaction where the free energy of the system decreases.

exothermic – Exothermic is the term used to describe a reaction or process that releases energy in the form of heat. Sometimes the term is applied to processes that release other forms of energy, such as electrical energy, sound, or light.
Example: Combustion of wood is an exothermic reaction.

exothermic reaction – A chemical reaction that produces heat (has a negative change in enthalpy – ΔH).

extinction – In chemistry, extinction is a measure of the quantity of light absorbed by a sample.
Also known as: Absorbance, optical density, decadic absorbance

E-Z notation – E-Z notation is a method of describing the stereochemistry of double bonds. Each substituent attached to the carbons in the double bond are assigned a priority value. When the substituents with the highest priority are on the same side of the double bond, the compound is identified with an E- (entegegen – German for contrary). When the highest priority substituents are on the same side, the compound is identified with a Z- (zusammen – German for together).