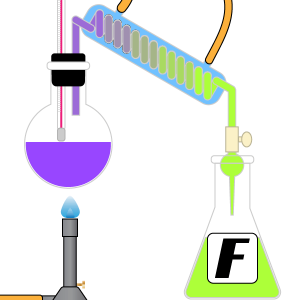 f subshell – A subshell that corresponds to the angular momentum quantum number ℓ = 3, found in the fourth and higher principal energy levels. Each contains seven orbitals.

face-centered cubic – A crystal unit cell that is cubic in shape with identical atoms at each corner and in the center of each face.
Example: Calcium and strontium form this type of unit cell, as do many of the transition elements.

Fahrenheit – The Fahrenheit temperature scale was developed by Daniel Fahrenheit (1686-1736) and denoted by the symbol °F. This temperature scale is still in use in a few countries, including the United States for mostly non-scientific uses.
It was originally based on three calibration points. The first point was to allow a mixture of ice, water, and ammonium chloride to reach equilibrium and recorded the lowest temperature as 0 °F. The second point was recorded at 32 °F when ice would start to form on the surface of still water. The third point was assigned to 96 °F and taken from the body temperature of a person. This point was later changed the top number at 212 °F for the boiling point of water.
Also known as: °F

family – In Chemistry, family refers to a group of elements with similar chemical properties. Chemical families tend to be associated with the vertical columns of the periodic table.
Also known as: Groups
Example: Group 18 on the periodic table is also known as the noble gas family.

Faraday (F) – A unit of charge denoted by F equal to the total charge on 1 mole of electrons. 1 F = 96,487 coulombs.
Common Mistake: confusing a Faraday with a farad, also denoted by F, which is a unit of capacitance.

fat – A fat is a compound that is generally soluble in organic solvents and largely insoluble in water. Fats are triesters of glycerol and fatty acids. Fats may be either solid or liquid, though sometimes the term is reserved for solid compounds.

feedstock – Feedstock refers to any unprocessed material used to supply a manufacturing process.
Also known as: raw material
Example: Crude oil is a feedstock for the production of gasoline.

femto – Femto is the prefix associated with x10-15 and is denoted by the symbol f.
Example: The size of a hydrogen atom’s nucleus is approximately 1 fm or 1 x 10-15 m.

ferrate – Ferrate is a polyatomic ion with formula FeO42-.

fermium – Fermium is the name for the actinide element with atomic number 100 and is represented by the symbol Fm.

fermentation – Fermentation is a class of chemical processes that produce energy through oxidation reactions with organic compounds.

ferric – Ferric is a deprecated chemistry term for the iron ion with a +3 oxidation state or Fe3+.

ferrous – Ferrous is a deprecated chemistry term for the iron ion with a +2 oxidation state or Fe2+.

filtration – Filtration is a mechanical or physical process to separate solid particulates from fluids.

fire – Fire is the heat and light formed as a product of an oxygen based combustion.

fire point – Fire point is the lowest temperature where the vapor of a liquid will initiate and sustain a combustion reaction.

flame test – A flame test is an analytical technique to identify the presence of metal ions in a sample by heating the sample with a flame and examining the color of the flame.

flammable – Flammable is a property of a material relating how easily the material ignites or sustains a combustion reaction.
Also known as: inflammable
Antonym: nonflammable

flash point – Flash point is defined as the lowest temperature the vapor of a liquid initiates a combustion reaction.

fluid – A fluid is any substance that flows or deforms under an applied shear stress. Fluids comprise a subset of the states of matter and include liquids, gases, and plasma.
Examples: All liquids and gases are fluids (air, water, oil)

fluorination – Fluorination is a chemical reaction where a fluorine atom is integrated into a molecule.

fluorine – Fluorine is the name for the halogen element with atomic number 9 and is represented by the symbol Fl.

fluorocarbon – A fluorocarbon is an organic compound that contains one or more fluorine atoms.
Also known as: organofluoride, organofluorine, fluoridated hydrocarbon
Example: Fluoroethylene or vinyl fluoride is a fluorocarbon.

foam – Foam is a substance where air or gas bubbles are trapped inside a solid or liquid.
Examples: Styrofoam, whipped cream, soap bubbles are all foams.

force – Force is a push or a pull on an object with mass that can cause it to change its velocity (to accelerate). A force is a vector, which means it has both magnitude and direction.
The SI unit of force is the Newton (N).

formalin – Formalin is an aqueous solution of formaldehyde.

francium – Francium is the name for the alkali metal element with atomic number 87 and is represented by the symbol Fr.

free energy – Free energy refers to the amount of internal energy of a thermodynamic system that is available to perform work.

free radical – A free radical is a molecule with an unpaired electron. Because they have a free electron, such molecules are highly reactive.
Examples: Singlet oxygen and free hydroxy groups are both free radicals.

freezing – Freezing is the process through which a substance changes from a liquid to a solid. All liquids except helium undergo freezing when the temperature becomes sufficiently cold.
Example: Water changing to ice is a freezing process.

frequency – Frequency is the number of times a point on a wave passes a fixed reference point in one second. The SI unit for frequency is the Hertz (Hz).
Also known as: cycles per second

friable – Friable is a property where a material is easily crumbled or broken down into smaller pieces.
Examples: Styrofoam and sandstone are friable materials.

fuel cell – A fuel cell is a device that converts the chemical energy of a source fuel into electrical energy.

fungicide – A fungicide is a compound which kills fungi. Fungicides are antifungal compounds.

furanose – A furanose is a five member ring structure containing four carbon atoms and one oxygen atom. Furanose is a simple sugar molecule.

fusion – Fusion is the process of combining lighter atomic nuclei to form a heavier nucleus with a release of energy.