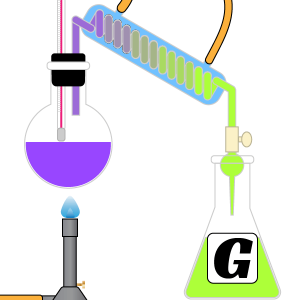 gadolinium – Gadolinium is the name for the lanthanide element with atomic number 64 and is represented by the symbol Gd.

gallium – Gallium is the name for the metal element with atomic number 31 and is represented by the symbol Ga.

gallon – Gallon is a unit of volume. There are three types of gallons:

galvanic cell – A galvanic cell is a cell where chemical reactions between dissimilar conductors connected through an electrolyte and a salt bridge produce electric energy. A galvanic cell can also be powered by spontaneous oxidation-reduction reactions.
Also known as: Daniel cell, voltaic cell

galvanization – Galvanization is a process that applies a coat of zinc to metal to prevent oxidation.

galvanometer – A galvanometer is a device for detecting and measuring small electric currents.
Also known as: ammeter
Example: Many electric pH meters use a galvanometer to determine the pH of a solution.

gas – Gas is a state of matter consisting of particles that have neither a defined volume nor defined shape.
Examples: Air, chlorine, and ozone are all gases at room temperature and pressure.

gauche – Gauche is a conformation where the dihedral angle between two atoms or groups of atoms is greater than 0° and less than 90°. Gauche most often refers to a dihedral angle of 60°

Geiger-Müller counter – A device used to measure the rate of radioactive decay. A type of radiation detector.

gel – A gel is a sol in which the solid particles have meshed such that a rigid or semi-rigid mixture results.
Example: Fruit jelly is an example of a gel. Cooked and cooled gelatin is another example of a gel. The protein molecules of gelatin crosslink to form a solid mesh which contains pockets of liquid.

geology – Geology is the scientific study of the earth and the matter of which it is made. It includes the study of volcanoes, rocks, minerals, gemstones, earthquakes, fossil fuels, metals, and tectonics. Geologists seek to understand how the earth was formed, the processes that affect it, its properties, and its structure.

germanium – Germanium is the name for the metalloid element with atomic number 32 and is represented by the symbol Ge.

Gibbs-Helmholtz equation – A relationship between ΔG, ΔH, and ΔS: ΔG = ΔH – TΔS, where
T is temperature, H is enthalpy, S is entropy, and G is free energy.

glass – A glass is an amorphous solid. The term is usually applied to inorganic solids and not to plastics or other organics. Glasses do not have crystalline internal structure. They usually are hard and brittle solids.

gln – Gln is an abbreviation for the amino acid glutamine. Glutamine is also abbreviated as Q.

glu – Glu is an abbreviation for the amino acid glutamic acid. Glutamic acid is also abbreviated as E.

gly – Gly is an abbreviation for the amino acid glycine. Glycine is also abbreviated as G.

glycerite – A glycerite is an extract prepared by soaking a sample in glycerin or a glycerin solution. Either vegetable-based or animal-based glycerin may be used, though it is customary to use plant-based glycerin to prepare herbal glycerites. Some chemical compounds are more soluble in glycerin than in water or alcohol, so they may be extracted more fully in a glycerite. Glycerin is non-toxic and glycerites containing 70% glycerin or a higher concentration suppress microbial growth (glycerin acts as a natural preservative).
Synonyms: glycerita, glyceroles, glycerates, glycemates

glycol – A glycol is a molecule that contains two hydroxyl groups.
Also known as: diol

G-protein coupled receptor – A G-protein coupled receptor is a type of cell surface protein that is coupled to G-proteins (guanosine triphosphate or GTP-binding protein). G proteins are a family of similar proteins located in the cell’s plasma membrane that binds to activated complexes and undergoes conformational changes by binding or hydrolyzing GTP to modify channel gates in the cellular membrane. In this way, the cell surface receptors are said to be coupled to intracellular responses.

gold – Gold is the name of the transition metal element with atomic number 79 and is represented by the symbol Au.

gray A unit of the absorbed dose of radiation. One gray is one joule of energy absorbed per kilogram of tissue.

ground state – Ground state is the lowest allowed energy state of an atom, molecule, or ion.

group – A group in chemistry is a vertical column of the periodic table.
An alternate definition is any collection of elements with common chemical or physical properties.