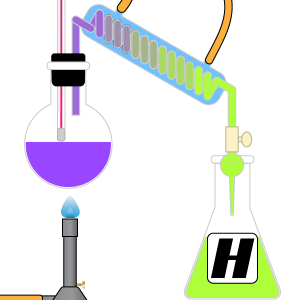 Haber process – The Haber process or Haber-Bosch process is an industrial process that is used to make ammonia from hydrogen and nitrogen. Fritz Haber received the 1918 Nobel Prize in Chemistry for the discovery of this process.

hafnium – Hafnium is the name for the transition metal element with atomic number 72 and is represented by the symbol Hf.

half-life (t1/2) – Half-life is the time required to convert one-half of a reactant to product. The term is commonly applied to radioactive decay, where the reactant is the parent isotope and the product is a daughter isotope.
Example: Tritium (H-3) has a half-life of 12.3 years where it decays into Helium-3 by beta decay. A 1 gram sample of tritium will only contain 0.5 grams of tritium in 12.3 years. In an additional 12.3 years, this same sample will only contain 0.25 grams of tritium.

halide – A halide is a binary compound where one of the elements is a halogen.
Examples: Hydrochloric acid (HCl) is a halide because it contains only two atoms and one, chlorine, is a halogen.

haloalkane – A haloalkane is an alkane containing one or more halogen atoms.
Also known as: halogenoalkane

haloarene – Haloarene is a molecule where a halogen atom is bonded to a carbon atom that is part of an aryl ring.
Also known as: halogenoarene, aryl halide
Examples: Chlorobenzene, fluorobenzene, and bromobenzene are all haloarene molecules.

halogen – A halogen is an element located in Group VIIA (or group 17) of the periodic table. Halogens are reactive nonmetals having seven valence electrons.

halogenation – Halogenation is a chemical reaction where a halogen atom is integrated into a molecule.

halohydrin – Halodydrin is another term for haloalcohol. See definition above.

hassium – Hassium is the name for the transition metal element with atomic number 108 and is represented by the symbol Hs.

heat – Heat is the form of energy that flows between two samples of matter due to their difference in temperature. Heat is usually denoted by the variable ‘Q’.
Heat also applies to the process of raising the temperature of a substance.

heat of formation ( ΔHf) – Heat of formation is the heat released or absorbed (enthalpy change) during the formation of a pure substance from its elements, at constant pressure and usually denoted by ΔHf.

heat of fusion ( ΔHfus) – Heat of fusion is the change in enthalpy for the conversion of 1 mole or 1 gram of a solid to the liquid phase, at constant pressure and temperature and is usually denoted as ΔHfus.

heat of sublimation ( ΔHsub) – Heat of sublimation is the change in enthalpy for the conversion of 1 mole or 1 gram of a solid directly to the gas phase, at constant pressure and temperature and is usually denoted by ΔHsub.

heavy naphtha – Heavy naphtha is a type of naphtha distilled from 6- to 12-carbon hydrocarbons boiled between 90 °C and 200 °C.

hecto – Hecto is the prefix associated with 102. The symbol for hecto is h.

Heisenberg uncertainty principle – The scientific principle stating that it is impossible to determine with perfect accuracy both the position and momentum of a particle at any given point in time.

helium – Helium is the name for the noble gas element with atomic number 2 and is represented by the symbol He.

Henry’s Law – Henry’s Law is a chemistry law which states that the mass of a gas which will dissolve into a solution is directly proportional to the partial pressure of that gas above the solution.

hepatic air – Hepatic air is a deprecated term for the compound hydrogen sulfide, H2S. Hepatic air was the gas associated with the ‘rotten egg’ smell of burning sulfur.

heptose – A heptose is a monosaccharide with seven carbon atoms.

hepatotoxic – Hepatotoxic is when a chemical compound is harmful to the liver. Hepato is the Greek word for liver.
Example: Tylenol or acetaminophen is hepatotoxic.

hepatotoxin – Hepatotoxin is another term for hepatotoxic. See definition above.

herbicide – Herbicides are a class of chemical compound that is toxic to plant life.
Example: 2,4-dichlorophenoxyacetic acid or 2,4-D is a common herbicide developed to control broadleaf weeds around crops.

hermetic seal – A hermetic seal is an enclosure of a volume making it impervious to air or a gas.
Also known as: airtight seal

heteroatom – A heteroatom is any atom other than carbon or hydrogen in an organic molecule.

heterodimer – A heterodimer is a dimer where both mer subunits are different from each other.

hexose – A hexose is a monosaccharide with six carbon atoms.
Example: Glucose is a hexose molecule.

hexavalent – Hexavalent refers to an element or compound with a valence equal to six.
Example: Chromium can be hexavalent.

his – His is an abbreviation for the amino acid histidine. Histidine is also abbreviated as H.

holmium – Holmium is the name for the lanthanide element with atomic number 67 and is represented by the symbol Ho.

homodimer – A homodimer is a dimer where both mer subunits are identical.

homogeneous – Homogeneous refers to a substance that is consistent or uniform throughout its volume.
Example: Air is considered a homogeneous mixture of gases.

homonuclear – Homonuclear refers to molecules consisting of only one element.
Examples: H2, O2, N2 are all homonuclear molecules.

homopolymer – A homopolymer is a polymer where every mer unit of the chain is the same.
Example: Polyvinylchloride (PVC) is a homopolymer.

hormone – A hormone is a molecule that is secreted directly into the bloodstream of an organism through a ductless gland. The molecule acts as a chemical messenger, carrying information from one cell or group of cells to another area.
Examples: Epinephrine, melatonin, serotonin, insulin, testosterone are all hormones.

Note: Hückel’s Rule does not work for systems with more than three fused rings. For example, pyrene contains four fused rings and is aromatic even though it has 16 conjugated π-electrons.

humidity – Humidity is the measure of the amount of water vapor present in air.

hydrargyrum – Hydrargyrum is the Latin name for the element mercury. Hydrargyrum means ‘liquid silver’ and is the source for mercury’s element symbol Hg.

hydride – A hydride is a compound containing a hydride ion.
Example: The strong base sodium hydride (NaH) is a hydride compound.

hydride ion – A hydride ion is a negatively charged ion of hydrogen or H–.
Also known as: hydrogen anion

hydrocarbon – A hydrocarbon is a substance consisting only of carbon and hydrogen atoms.
Examples: Benzene (C6H6) and hexane (C6H14) are hydrocarbons.

hydrogen – Hydrogen is the name for the nonmetal element with atomic number 1 and is represented by the symbol H.

hydrogenation – Hydrogenation is a reduction reaction which results in an addition of hydrogen (usually as H2). If an organic compound is hydrogenated, it becomes more ‘saturated’. Hydrogenation has many applications, but most people are familiar with the reaction as the one used to make liquid oils into semi-solid and solid fats. There may be some health concerns associated with hydrogenation of unsaturated dietary fats to produce saturated fats and trans fats.

hydrometer – A hydrometer is a device that measures the relative densities of two liquids. They are typically calibrated to measure the specific gravity of a liquid.
Example: Salt water aquarium enthusiasts use hydrometers to monitor the salinity or salt content of their aquariums.

hydron – A hydron is the cation of a hydrogen atom: H+.

hydrophilic – Hydrophilic is a molecule or functional group that forms strong hydrogen bonds with water.

hydrophobic – Hydrophobic is a property of a substance to repel water. Hydrophobic molecules tend to be nonpolar molecules and group together.
Examples: Oils and fats are hydrophobic.

hydroxide – A hydroxide is an ion containing one oxygen and one hydrogen atom. The chemical formula for the hydroxide ion is OH–.

hydroperoxyl – A hydroperoxyl is a radical with chemical formula HO2. Hydroperoxyls can be formed when a proton is donated to a superoxide ion, hydrogen added to an oxygen molecule or an oxygen atom added to a hydroxyl group.

hygroscopic – Hygroscopic is a property of a substance to absorb or adsorb water from its surroundings.
Examples: Zinc chloride, sodium chloride, and sodium hydroxide crystals are hygroscopic.

hypergolic – Hypergolic refers to the property of a mixture to spontaneously combust when the components are mixed together.

hypertonic – Hypertonic refers to a solution with higher osmotic pressure than another solution.

hypotonic – Hypotonic refers to a solution with lower osmotic pressure than another solution.