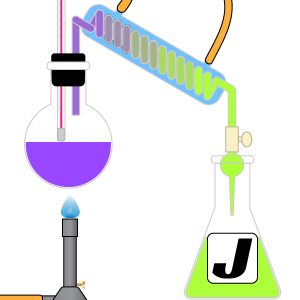 Jablonski Diagram – A Jablonski diagram is a diagram showing energy states of a molecule and transitions between these states. States are marked with horizontal lines and arranged vertically by energy. Transitions are indicated by arrows between states. Transitions, where radiation is released or absorbed, are marked by solid arrows. Radiationless transitions are denoted by wavy arrows.

jodium or jod – Jodium is the Latin name for the element iodine.
Also known as: iodine, iodes, iode

joule – The joule is a derived SI unit of energy. A joule is equal to the kinetic energy of a kilogram mass moving at the speed of one meter per second. A joule is also the work done by a 1 Newton force moving a mass 1 meter or the energy dissipated when 1 ampere of current passes through a 1-ohm resistor.
1 J = 1 N·m = 1 kg·m2/s2

junction unit – A junction unit is a non-repeating atom or group of atoms that appear between monomer blocks in a block macromolecules.