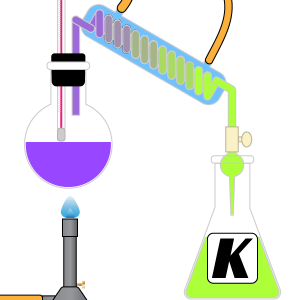 K-electron – K-electron refers to the electrons of an atom with energy quantum number n = 1.
Also known as: K electron

K-shell – K-shell refers to the electrons of an atom with energy quantum number n = 1.
Also known as: K shell

Kelvin effect (Thomson effect) – The Kelvin effect is the generation or absorption of heat when an electrical current is passed through a material.

keratin – Keratin is a fibrous structural protein found in animal cells and used to form specialized tissues. Specifically, the proteins are only produced by chordates (vertebrates, Amphioxus, and urochordates), which includes mammals, birds, fish, reptiles, and amphibians.
Examples: Hair, nails, horns, bird beaks, and reptile scales are all primarily keratin.

ketone – A ketone is a compound containing a carbonyl functional group bridging two groups of atoms. The general formula for a ketone is RC(=O)R’ where R and R’ are alkyl or aryl groups. IUPAC ketone functional group names contain “oxo” or “keto”. Ketones are named by changing the -e on the end of the parent alkane name to -one.
Example: Acetone is a ketone. The carbonyl group is connected to the alkane propane, therefore the IUPAC name for acetone would be propanone.

ketohexose – A ketohexose is a hexose carbohydrate that contains a ketone functional group.

ketopentose – A ketotetrose is a pentose carbohydrate that contains a ketone functional group.

ketose – A ketose is a molecule made up of a monosaccharide bonded to a ketone.

ketoxime – A ketoxime is an oxime where neither the R nor R’ functional groups are hydrogen atoms.

kinase – A kinase is an enzyme that transfers a phosphate group from one molecule to another substrate.

kinetic – A term associated with motion.
An example of usage: The kinetic energy of a particle is equal to ½ multiplied by its mass multiplied by the square of its velocity.

kinetic theory – Kinetic theory is a model of molecular motion that is used to explain many of the properties of gases.

kinetics – Kinetics is the study of the rates of chemical reactions.

kosmotropic – Kosmotropic is the ability of a substance to increase the stability of intermolecular forces in water-water interactions, hydrogen bonding, and van der Waals forces.
Kosmotropic agents are compounds that increase protein and polymer stability.
Antonym: chaotropic
Examples: Sulfate, lithium, and zinc ions are kosmotropic.

krypton – Krypton is the name for the noble gas element with atomic number 36 and is represented by the symbol Kr.

kryptonite – Kryptonite is the name of a fictitious element referenced in Superman stories. Kryptonite comes in a variety of colored forms that have different effects on Superman. Kryptonite has nothing to do with the element krypton.