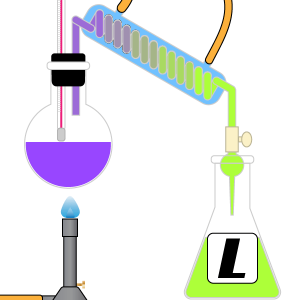 lanthanides – Elements with atomic numbers 58-71 (although there is some dispute over exactly where the lanthanides begin and end!). The lanthanide series is the group of elements in which the 4f sublevel is being filled. See the section on lanthanides for further information.
Also known as: Rare earth metals, rare earth elements, common earth elements.
Examples: Europium, lanthanum, dysprosium, and erbium are all lanthanide elements.

lanthanum – Lanthanum is the name for the lanthanide element with atomic number 57 and is represented by the symbol La.

lattice energy – Lattice energy is the ΔH (enthalpy change) for the process in which oppositely charged ions in the gas phase combine to form an ionic lattice in the solid phase.

lattice point – Lattice points are the positions occupied by atoms in a crystal unit cell.

law – A law in science is a generalized rule to explain a body of observations in the form of a verbal or mathematical statement. Scientific laws imply a cause and effect between the observed elements and must always apply under the same conditions. Scientific laws do not try to explain the ‘why’ the observed event happens, but only that the event actually occurs the same way over and over.

Law of Combining Volumes – The law of combining volumes is a relation stating that the relative volumes of gases in a chemical reaction are present in the ratio of small integers (assuming all gases are at the same temperature and pressure).
Also known as: Gay-Lussac’s Law
Examples: In the reaction
2 H2(g) + O2(g) → 2 H2O(g)
2 volumes of H2 react with 1 volume of O2 to produce 2 volumes of H2O.

Law of Conservation of Energy – Law of conservation of energy is a law which states energy cannot be created or destroyed but may be changed from one form to another.

Law of Constant Composition – The law of constant composition is a chemistry law which states samples of a pure compound always contains the same elements in the same mass proportion.
Also known as: Law of Definite Proportions

Law of Definite Proportions – The law of definite proportions is another name for the law of constant composition. See the definition above.

Law of Multiple Proportions – Law which states that when elements combine, they do so in the ratio of small whole numbers (assuming they have the same type of chemical bonds).
Also known as: Dalton’s Law, though that term usually refers to his law of partial pressure.
Examples: Carbon and oxygen react to form CO or CO2, but not CO1.6.

lawrencium – Lawrencium is the name for the actinide element with atomic number 103 and is represented by the symbol Lr.

lead – Lead is the name for the metal element with atomic number 36 and is represented by the symbol Kr.

leaving group – Leaving group refers to an atom or group of atoms removed from the rest of a molecule. When the leaving group is removed, the group takes the electron pair that previously formed the bond at the cleavage point. Leaving group is also known as nucleofuge and commonly abbreviated as LG. Leaving group can also be applied to the removal of atoms from a proton. Leaving groups of this type are conjugate bases of the acid that supplied the proton.

leu – Leu is an abbreviation for the amino acid leucine. Leucine is also abbreviated as L.

levorotatory – Levorotatory refers to a chiral molecule which rotates plane polarized light counterclockwise with respect to the light approaching the viewer. Levorotatory enantiomers are denoted by the prefix L-.

Lewis acid – A Lewis acid is a substance that is an electron pair acceptor.
Example: H+ is a Lewis acid because it can accept a pair of electrons. It combines with the available electron pair from the Lewis base OH– to form H2O.

Lewis base – A Lewis base is a substance that is an electron pair donator.
Example: OH– is a Lewis base because it has a pair of free electrons to donate to a reaction. It can donate the electron pair to the Lewis acid H+ to form H2O.

Lewis structure – A Lewis structure is a structural representation of a molecule where dots are used to show electron position around the atoms and lines or dot pairs represent covalent bonds between atoms.
Also known as: Lewis-Dot diagrams, electron-dot diagrams

ligand – A ligand is an atom, ion, or molecule that donates or shares one or more of its electrons through a covalent bond with a central atom or ion. It is a complexing group in coordination chemistry that stabilizes the central atom and determines its reactivity.

light naphtha – Light naphtha is a type of naphtha distilled from 5- to 6-carbon hydrocarbons boiled between 30 °C and 60 °C.

limestone – Limestone is a rock composed of crystals of the compound calcium carbonate or CaCO3.

lipid – A lipid is any fat-soluble naturally-occurring molecule.
Examples: Fats, oils, waxes, and sterols are all lipids.

liquid – A liquid is one of the states of matter. The particles in a liquid are free to flow, so while a liquid has a definite volume, it does not have a definite shape.
Examples: At room temperature: water, mercury, vegetable oil, ethanol are all in the liquid phase.

liter – The liter is a unit of volume. 1 liter is defined to enclose 1000 cubic centimeters. There are many symbols used to represent a liter: L, l, and a lowercase cursive l (ℓ). The most commonly used symbol is the capital L.
Alternate spelling: litre

lithium – Lithium is the name for the alkali metal element with atomic number 3 and is represented by the symbol Li.

lone pair – A lone pair is an electron pair in the outermost shell of an atom that is not shared or bonded to another atom.

lox – Lox is an abbreviation for liquid oxygen.

lutetium – Lutetium is the name for the lanthanide element with atomic number 71 and is represented by the symbol Lu.

lyase – A lyase is an enzyme that catalyzes a reaction which adds or removes a group from a molecule to form a double bond or new ring by a process other than hydrolysis or oxidation.

Lyman series – The Lyman series is a set of ultraviolet emission lines from hydrogen that correspond to electron transitions between principle energy levels n > 1 to the ground energy level, n = 1.

lys – Lys is an abbreviation for the amino acid lysine.
Lysine is also abbreviated as K.