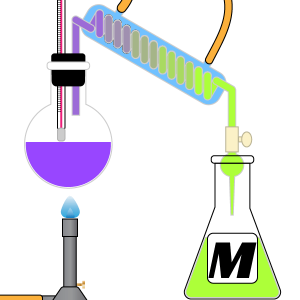 magnesium – Magnesium is the name for the alkaline earth element with atomic number 12 and is represented by the symbol Mg.

main group – A main group is any of the numbered groups within the Periodic Table.
Example: Group 1, the alkali metals, is a main group.

malleable – Malleable is the term for a substance capable of being shaped. The term is often used with reference to metals, as in the degree to which they can be shaped by pounding with a hammer.

manganese – Manganese is the name for the transition element with atomic number 25 and is represented by the symbol Mn.

mass – Mass is the property which reflects the quantity of matter within a sample. Mass is reported in grams and kilograms.

mass defect – Mass defect refers to the difference in mass between of an atom and the sum of the masses of the protons, neutrons, and electrons of the atom. This mass is typically associated with the binding energy between nucleons.

mass number – An integer equal to the sum of the number of protons and neutrons in an atomic nucleus.
Example: 37Cl17 has a mass number of 37. Its nucleus contains 17 protons and 20 neutrons.

mass spectroscopy – Mass Spectroscopy is an analytical laboratory technique to separate the components of a sample by their mass. The sample is vaporized into a gas and then ionized. The ions are then accelerated through a potential difference and focused into a beam. The ion beam passes through a magnetic field which bends the charged stream. Lighter components or components with more ionic charge will deflect in the field more than heavier or less charged components. A detector counts the number of ions at different deflections and the data can be plotted as a ‘spectrum’ of different masses.
Also known as: Mass spec, mass spectrometry

matter – There are many possible definitions for matter. Matter is the term for any type of material. Matter is anything that has mass and takes up space. The word is sometimes used to refer to a pure substance.

measurement – Measurement is collection of quantitative data. A measurement is made by comparing a quantity with a standard unit. Since this comparison cannot be perfect, measurements inherently include error.

mechanism – Mechanism refers to the sequence of steps which occur during a chemical reaction.

Mega – Mega is the prefix associated with x106 and is denoted by the symbol M.
Example: The circumference of the Earth at the equator is approximately 40 Megameters or 40,000,000 meters.

meitnerium – Meitnerium is the name for the transition metal element with atomic number 109 and is represented by the symbol Mt.

melting – Melting is the process by which a substance changes from the solid phase to the liquid phase.
Example: Melting of a solid ice cube into liquid water.

melting point – The temperature at which a solid and liquid phase may coexist in equilibrium. The term applies to pure liquids and solutions. Melting point is often abbreviated to m.p.
Also known as: freezing point

mendelevium – Mendelevium is the name for the actinide element with atomic number 101 and is represented by the symbol Md.

meniscus – A meniscus is phase boundary that has been curved because of surface tension.
Also known as: menisci, meniscuses
Example: A meniscus is seen between the air and water in a glass of water. The water is seen to curve up the edge of the glass.

mer – A mer is a group of atoms that constitute a polymer chain repeating unit.

mercury – Mercury is the name of the transition metal element with atomic number 80 and is represented by the symbol Hg.

meso – Meso- is a prefix used in organic chemistry nomenclature to identify substituents occupying a benzylic position, with the first carbon covalently bonded adjacent to an aromatic ring.

mesomerism – Mesomerism is a method of describing the delocalized electrons in some molecules where the bonding cannot be explicitly expressed by a single Lewis structure. Each individual Lewis structure is called a contributing structure of the target molecule or ion. Contributing structures are not isomers of the target molecule or ion since they only differ by the position of delocalized electrons.
Also known as: resonance

met – Met is an abbreviation for the amino acid methionine. Methionine is also abbreviated as M.

metabolite – A metabolite is any chemical compound produced as a result of metabolism or a metabolic reaction.
Example: Glucose is one of the metabolites of starch metabolism.

metal – A substance with high electrical conductivity, luster, and malleability, which readily loses electrons to form positive ions (cations). Metals are otherwise defined according to their position on the Periodic Table, including groupings as alkali metals, alkaline earth metals, transition metals, and rare earth metals.

metalloid – A metalloid is an element with properties intermediate between those of a metal and nonmetal. Metalloids may also be defined according to their location on the Periodic Table.
Also known as: semimetal
Examples: silicon and boron are metalloid elements.

microbicide – Microbicide is a compound that damages or destroys microbial organisms.

micrometer – A micrometer is a unit of length equal to 1/1,000,000th of a meter. The symbol for micrometer is μm.
1 μm = 10-6 m.
Also known as: micron
Example: Red blood cells are approximately 10 micrometers in diameter.

micron – Micron is a shortened name for micrometer. See micrometer definition above.

microwave – Microwaves are part of the electromagnetic spectrum of light corresponding to frequencies between 300 MHz and 300 GHz or wavelengths between 3 mm and 30 cm.

milli – Milli is the prefix associated with x10-3 and is denoted by the symbol m.
Example: A teaspoon can hold 5 milliliters of liquid.

mineral – A mineral is a naturally occurring solid with a characteristic composition, crystalline atomic structure, and distinct physical properties. Minerals can be pure elements or complex chemical compounds.

mixture – A mixture is two or more substances which have been combined such that each substance retains its own chemical identity.
Example: Flour and sugar may be combined to form a mixture.

moderator – A moderator is a material that slows the speed of neutrons.

Moderators are used in nuclear reactors to slow the neutrons enough to increase the likelihood of interaction with another nucleus to initiate fission.
Also known as: neutron moderator
Examples: Water, graphite and heavy water are all commonly used moderators in nuclear reactors.

moiety – Moiety is a specific group of atoms within a molecule that is responsible for characteristic chemical reactions of that molecule.
Also known as: functional group
Examples: hydroxyl moiety: -OH and aldehyde moiety: -COH

molality – Molality is a unit of concentration, defined to be equal to the number of moles of solute divided by the number of kilograms of solvent.
Example: The solution made by dissolving 0.10 mol of KNO3 into 200 g of H2O would be 0.50 molal in KNO3 (0.50 m KNO3).

molar – Molar refers to the unit of concentration molarity, which is equal to the number of moles per liter of a solution. Molar also refers to other measurements dealing with moles such as molar mass, molar heat capacity, and molar volume.
Examples: A 6 molar (6 M) solution of H2SO4 refers to a solution with six moles of sulfuric acid per liter of solution.

molecularity – Molecularity is the number of molecules involved in a single step of a chemical reaction.

molecule – A molecule refers to two or more atoms which have chemically combined to form a single species.
Examples: Examples of molecules include water H2O, oxygen, gas, O2

molybdenum – Molybdenum is the name for the transition metal element with atomic number 42 and is represented by the symbol Mo.

monomer – A monomer is a molecule that forms the basic unit for polymers. Monomers may bind to other monomers to form a repeating chain molecule.
Examples: glucose, vinyl chloride, amino acids are all monomers.

moscovium – Moscovium is the name of the basic metal element with atomic number 115 and represented by the symbol Mc. The name moscovium was adopted and replaced the placeholder name of ununpentium in 2016.

mother liquor – Mother liquor is a deprecated term from older chemistry texts that refer to the solution that remains after crystallization occurs and the crystals are removed.

MSG – MSG refers to the molecule monosodium glutamate (C5H8NO4Na). MSG is used as a food additive to enhance flavor.

muriatic acid – Muriatic acid is a general name for a solution of hydrochloric acid or HCl.