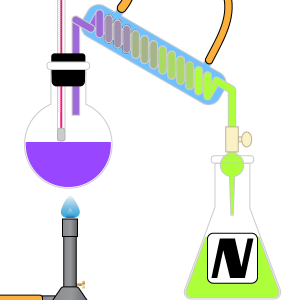 NA number – An NA number or DOT number is a North America number assigned by the United States Department of Transportation to identify a hazardous or flammable chemical. It is analogous to a UN Number, except some chemicals have an NA number, yet don’t have a UN number. These additional NA numbers have the range NA8000 – NA9999.

nano – Nano is the prefix associated with x10-9 and is denoted by the symbol n.
Example: Visible light has a range of wavelengths from 400 (red) to 700 (violet) nanometers.

necrosis – Necrosis is the destruction of one or more cells from an external cause such as a toxin, infection, radiation or trauma.
Example: Ultraviolet radiation can cause necrosis of the skin in the form of a sunburn.

negatron – A negatron is a negatively charged particle emitted during β- decay. Negatron is also a term used to describe any electron.
Also Known as: beta particle, electron

neodymium – Neodymium is the name for the lanthanide element with atomic number 60 and is represented by the symbol Nd.

neon – Neon is the name for the noble gas element with atomic number 10 and is represented by the symbol Ne.

neptunium – Neptunium is the name for the actinide element with atomic number 93 and is represented by the symbol Np.

Nernst equation – The Nernst equation is an equation relating the voltage of a chemical cell to its standard cell potential and to the concentrations of the reactants and product.
The Nernst equation is:
Ecell = E0cell – (RT/nF) x log10Q
where
Ecell is the cell potential
E0cell refers to standard cell potential
R is the gas constant
T is the absolute temperature
n is the number of moles of electrons transferred by the cell’s reaction
F is Faraday’s constant
Q is the reaction quotient, where Q = [C]c·[D]d / [A]a·[B]b
where A, B, C, and D are chemical species; and a, b, c, and d are coefficients in the balanced equation:
aA + bB → cC + dD
Example: At 25 °C, the Nernst Equation can be expressed as:
Ecell = E0cell – 0.0591/n x log10Q

neurotoxicant – Neurotoxicant is a toxic compound that can cause damage to the central nervous system.
Examples: Lead, aluminum, ammonia, and benzene are all neurotoxicants

neutralization – Neutralization is a chemical reaction between an acid and a base which produces a neutral solution (pH = 7).

neutrino – A neutrino is a fundamental particle with no electric charge and travels at speeds close to the speed of light. The symbol for neutrino is the Greek letter ν.
There are three types of neutrinos, each one associated with a partner particle.
νe electron neutrino
νμ = muon neutrino
ντ = tau neutrino
Example: Neutrinos are formed during some types of nuclear decay and when cosmic radiation collides with atoms in the atmosphere.

neutron – The neutron is the particle in the atomic nucleus with a mass = 1 and charge = 0.

nickel – Nickel is the name for the transition metal element with atomic number 28 and is represented by the symbol Ni.

nihonium – Nihonium is the name for the basic metal element with atomic number 113 and is represented by the symbol Nh. The name nihonium replaced the old placeholder name ununtrium in 2016.

niobium – Niobium is the name for the transition metal element with atomic number 41 and is represented by the symbol Nb. Niobium is also called Columbium.

nitrate – A nitrate is an ion with the chemical formula NO3–. Nitrates are also compounds that contain the nitrate ion.
Example: Ammonium nitrate (NH4NO3) is a nitrate.

nitrite – A nitrite is an ion with the chemical formula NO2–. Nitrites are also compounds that contain the nitrite ion.
Example: Ammonium nitrite (NH4NO2) is a nitrite.

nitrogen – Nitrogen is the name for the nonmetal element with atomic number 7 and is represented by the symbol N. Nitrogen is also called azote.

nitro group – Nitro group is a functional group containing nitrogen and oxygen in the form -NO2.

nobelium – Nobelium is the name for the actinide element with atomic number 102 and is represented by the symbol No.

noble gas – Any of the elements found in Group 8 at the far right of the Periodic Table. Noble gases have full electron shells to the maximum number for their energy level.
Examples: Helium, argon, xenon are all noble gases.

nonelectrolyte – A substance that does not exist in an ionic form in aqueous solution.
Example: Ethyl alcohol (ethanol) is a nonelectrolyte because it does not ionize when dissolved in water.

nonflammable – Nonflammable is the property of a material rendering incapable of being burned.
Antonym: flammable, inflammable

nonmetal – One of the elements which do not exhibit metallic properties, generally located in the upper righthand corner of the Periodic Table.
Examples: Oxygen and nitrogen are both nonmetals.

nonpolar bond – Type of chemical bond which has no positive or negative ‘ends’.
Examples: Nonpolar bonds are found in diatomic and homonuclear molecules, such as O2 and N2.

nonvolatile – Nonvolatile refers to a substance that does not readily evaporate into a gas under existing conditions.
Example: Glycerin (C3H8O3) is a nonvolatile liquid.

normal – There are two meanings for ‘normal’ in chemistry.

Also known as: normality, N, isotonic
Examples: (Definition 1) A 9% salt solution has a normal concentration with respect to most human body fluids.
(Definition 2) A 1 M sulfuric acid (H2SO4) is 2 N for acid-base reactions because each mole of sulfuric acid provides 2 moles of H+ ions. A 2 N solution is called a 2 normal solution.

normality – Normality is a measure of concentration equal to the gram equivalent weight per liter of solution. Gram equivalent weight is the measure of the reactive capacity of a molecule. The solution’s role in the reaction determines the solution’s normality.
For acid reactions, a 1 M H2SO4 solution will have a normality (N) of 2 N because 2 moles of H+ ions are present per liter of solution.
For sulfide precipitation reactions, where the SO4– ion is the important part, the same 1 M H2SO4 solution will have a normality of 1 N.

nuclear fission – Nuclear fission is the process where a heavy atomic nucleus is split into two or more smaller nuclei and energy is released.

nucleobase – A nucleobase is a heterocyclic base containing nitrogen that forms the base part of nucleotide molecules.
Also known as: nucleotide base, nitrogenous base
Examples: Cytosine, guanine, and adenine are all nucleotide bases.

nucleon – Nucleon is another name for the particles that make up an atomic nucleus: protons and neutrons.

nucleophile – A nucleophile is an atom or molecule that donates an electron pair to make a covalent bond.
Also known as: Lewis base
Example: OH– is a nucleophile. It can donate a pair of electrons to the Lewis acid H+ to form H2O.

nucleoside – A nucleoside is a compound formed from a nucleotide base and a five-carbon sugar.
Examples: Cytidine, uridine, adenosine and guanosine are all nucleosides.

nucleotide – A nucleotide is an organic molecule made up of a nucleotide base, a five-carbon sugar (ribose or deoxyribose) and at least one phosphate group. Nucleotides make up the basic units of DNA and RNA molecules.

nucleotide base – Another word for nucleobase. See definition above.

nucleus – Nucleus means center. In chemistry, nucleus refers to the positively charged center of the atom containing protons and neutrons.

nuclide – Nuclides are an atom or ion characterized by the contents of their nucleus.
Examples: 12C6 and 14C6 are both nuclides.

nutraceutical – Nutraceutical is any substance that is a food or a part of a food and provides medical or health benefits, including the prevention and treatment of disease. Nutraceutical products may range from isolated nutrients, dietary supplements and specific diets to genetically engineered designer foods, herbal products, and processed foods such as cereals, soups, and beverages.
Example: beta-carotene, lycopene