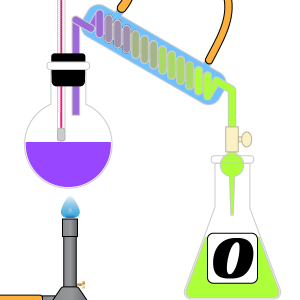 octahedral – Octahedral is defined as possessing the symmetry of a regular octahedron. Having a three-dimensional shape with 6 vertices and 8 faces, where each face forms an equilateral triangle.

octane number – Octane number is a value used to indicate the resistance of a motor fuel to knock. Octane numbers are based on a scale on which isooctane is 100 (minimal knock) and heptane is 0 (bad knock).
Also known as: Octane Rating
Examples: A gasoline with an octane number of 92 has the same knock as a mixture of 92% isooctane and 8% heptane.

octet rule – Refers to the principle that bonded atoms share their eight outer electrons. The octet rule is a ‘rule’ that is sometimes broken.

ohm – The ohm is the SI unit of electrical resistance. The symbol for ohm is Ω. One ohm is equal to the resistance between two points when a potential difference of one volt causes a current of one ampere.

olefin – An olefin is a hydrocarbon containing a carbon-carbon double bond.
Also known as: alkene

oleum – Oleum is a solution of concentrated sulfuric acid (H2SO4) and sulfur trioxide (SO32-).
Also known as: fuming sulfuric acid

oligomer – An oligomer is a macromolecule consisting of a small number of repeating mer units. An oligomer differs from a polymer where removal of mer units in an oligomer can change the properties of the larger molecule.

open system – An open system is a system that can freely exchange matter and energy with its surroundings.

optical isomerism – Situation in which members of a pair of molecules possessing an identical molecular formula rotate a beam of plane polarized light in opposite directions from each other. Molecules which are capable of optical isomerism have at least one chiral center.

orbital – Electron cloud having an energy state described by given values of the n, ℓ, and mℓ quantum numbers. An orbital can contain two electrons with paired spins and is often associated with a specific region of an atom.
Example: The electrons in the 2px orbital of an atom are generally found within a dumbbell-shaped cloud about the x-axis.

ortho – Ortho is a prefix used to describe a molecule where substituents are at the 1 and 2 positions on an aromatic compound. The symbol for ortho is o–

osmium – Osmium is the name for the transition metal element with atomic number 76 and is represented by the symbol Os.

osmosis – Osmosis is the process where solvent molecules move through a semipermeable membrane from a dilute solution into a more concentrated solution (which becomes more dilute).

osmotic pressure – Osmotic pressure is the name given to the hydrostatic pressure resulting from a concentration gradient across two sides of a surface, such as across a semipermeable membrane.

oxidant – An oxidant is a reactant that removes electrons from other reactants during a redox reaction.
Also known as: oxidizer, oxidizing agent
Examples: Hydrogen peroxide, ozone, and nitric acid are all oxidizers.

oxidizer – Another word for oxidant. See definition above.

oxidizing agent – Another word for oxidant. See definition above.

oxime – An oxime is an organic compound containing the >C=NOH functional group. The general formula for an oxime is RR’C=NOH. Oximes where R’ is a hydrogen atom are called aldoximes. All other oximes are called ketoximes.

oxoacid or oxyacid – An oxoacid is an acid that contains an oxygen atom bonded to a hydrogen atom and at least one other element.
Also known as: oxyacid
Examples: Sulfuric acid (H2SO4), phosphoric acid (H3PO4), and nitric acid (HNO3) are all oxoacids.

oxyanion – An oxyanion is an anion containing oxygen.
Examples: Nitrate (NO3–), Nitrite (NO2–), sulfite (SO32-) and hypochlorite (ClO–) are all oxyanions.

oxygen – Oxygen is the name for the element with atomic number 8 and is represented by the symbol O. It is a member of the nonmetal group.

oxygenate – The term oxygenate refers to compounds containing oxygen.
Examples: Oxygenates such as ethers and alcohol are commonly added to fuel to promote cleaner combustion.

ozonation – Ozonation is a chemical process that adds ozone (O3) to a substance.
Examples: Drinking water can be ozonated to kill microorganisms that can cause waterborne diseases.

ozone – Ozone is an allotrope of oxygen containing three oxygen atoms. The chemical formula for ozone is O3.
Also known as: trioxygen

ozonide – Ozonide is an unstable anion derived from ozone. Ozonide has a chemical formula of O3–. Ozonides are also organic compounds formed when ozone is reacted with a compound.