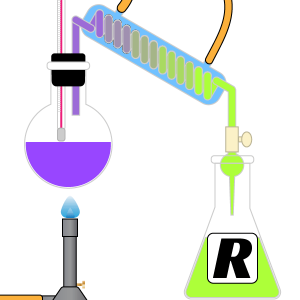 racemic – Racemic is a mixture of equal parts left- and right-handed enantiomers of a chiral molecule.
Also known as: racemic mixtures, racemate

rad – Rad is a unit of measuring absorbed radiation of matter.
1 rad = 0.01 J of energy per kg of matter.
Rad is also an abbreviation for radian.

radian – A radian is an angle with vertex at the center of a circle with radius r that encompasses an arc of length r. There are 2π radians in a circle.
1 radian = 57.29577951 degrees

radical – A radical is a molecule containing an unpaired free electron.
Also known as: free radical

radioactivity – Radioactivity is the spontaneous emission of radiation in the form of particles or high energy photons resulting from a nuclear reaction.

radioactive – Radioactive refers to a substance that causes or exhibits behavior due to radioactivity.

radium – Radium is the name for the alkaline earth element with atomic number 88 and is represented by the symbol Ra. Radium can be used to make surfaces glow in the dark.

radon – Radon is the name for the noble gas element with atomic number 86 and is represented by the symbol Rn.

rare earth – Rare earth is an oxide of a rare earth element.

rayon – Rayon is a commercial polymer fiber made from cellulose mer units.

reactant – Reactants are the starting material in a chemical reaction.
Examples: H2 and O2 are reactants in the reaction H2(g) + ½ O2(g) → H2O(l).

reaction rate – The reaction rate is the rate at which the reactants of a chemical reaction form the products. Reaction rates are expressed as concentration per unit time.

reagent – A reagent is a compound or mixture added to a system to cause a chemical reaction or to test if a reaction occurs.
The term reagent is often used in place of reactant, but a reagent may not necessarily be consumed in a reaction with a reactant. For example, a catalyst is a reagent but is not consumed in the reaction.

real gas – A real gas is a gas that does not behave as an ideal gas due to interactions between gas molecules.
Also known as: nonideal gas

receptor – A receptor is a molecule or surface on a cell that binds to or reacts with a messenger molecule to initiate a biological response.

reciprocal rule – The reciprocal rule is the relationship between equilibrium constants for forward (Kf) and reverse (Kr) reactions such that
Kr = 1/Kf.

reductant – Reductant is another term for reducing agent. See definition above.

refrigerant – A refrigerant is a compound that can readily absorb heat at one temperature, then compressed by a heat pump to a higher temperature and pressure where it changes phase and discharges the absorbed heat.
Example: Nearly all chlorofluorocarbons are refrigerants.

regelation – Regelation is a phenomenon where a substance melts under pressure and freezes again when the pressure is reduced.

relative density – Relative density is the dimensionless ratio of the densities of two materials. It is similar to specific gravity, in which the reference material is water.

relative humidity – A measure of the amount of water in air divided by the amount of water that the air could hold, expressed as 100 x P/P0, where P is the pressure of the water vapor in the air and P0 is the equilibrium vapor pressure of water at the same temperature.
Example: A relative humidity of 95% indicates that there is 95/100ths as much water in the air as that air is capable of holding at that temperature.

rem – A unit of absorbed radiation in biological tissue. Rem is equal to n times the number of rads, where the factor n is dependent on the type of radiation which is being absorbed.
Rem is also an acronym for rare earth metal.

rennet – Rennet is any preparation containing the enzyme rennin.
Rennet is also the name for the curdled milk from the fourth stomach or dried extract made from the stomach lining of an unweaned ruminant. Rennet is used as a coagulant in cheese production. Rennet consists mainly of hydrochloric acid, mucin and the enzymes pepsin, rennin and lipase.

rennin – Rennin is an endopeptidase enzyme in the gastric juice of the fourth stomach of unweaned ruminants that coagulates milk by converting caseinogen to casein to paracasein. Rennin from calves was used as a coagulating agent to make cheese, although modern cheese-making uses artificially produced microbial rennet. Rennin is a component of rennet.
Although not used in the production of cheese, rennin is produced by non-ruminant mammals, too, such as human babies.
Also known as: rennet, chymosin
Common misspellings: renin – also an enzyme, but produced by the kidney and used to regulate blood pressure.

residue – Residue can mean many different things in chemistry.

resin – Resin is secretion of plants containing hydrocarbons and terpenes. Resin also applies to any chemical additive that sets into a hard enamel or lacquer finish.

rhenium – Rhenium is the name for the transition metal element with atomic number 75 and is represented by the symbol Re.

rhodium – Rhodium is the name for the transition metal element with atomic number 45 and is represented by the symbol Rh.

ring molecule – A ring molecule is a molecule made up of a series of atoms bonded together to form a ring or circle.
Examples: Benzene, cyclopentene, and imidazole are all ring molecules.

RNA – RNA is the acronym for ribonucleic acid. Forms of RNA include messenger RNA (mRNA), transfer RNA (tRNA), and ribosomal RNA (rRNA). RNA codes for amino acid sequences, which may be combined to form proteins. Where DNA is used, RNA acts as an intermediary, transcribing the DNA code so that it can be translated into proteins.

roasting – Roasting is a process in metallurgy in which a sulfide ore is heated in air. The process may convert a metal sulfide to a metal oxide or to a free metal.
Examples: Roasting ZnS may yield ZnO; roasting HgS may yield free Hg metal.

roentgenium – Roentgenium is the name for the transition metal element with atomic number 111 and is represented by the symbol Rg. The roentgenium name was approved in 2004 to replace the placeholder name unununium (Uuu).

rosin – Rosin is a natural resin boiled down from pine trees and other conifers.
Also known as: colophony

rubidium – Rubidium is the name for the alkali metal element with atomic number 37 and is represented by the symbol Rb.

rust – Rust is a general term for the oxides of iron.

ruthenium – Ruthenium is the name for the transition metal element with atomic number 44 and is represented by the symbol Ru.

rutherfordium – Rutherfordium is the name for the transition metal element with atomic number 104 and is represented by the symbol Rf.