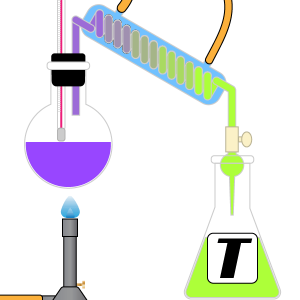 tantalum – Tantalum is the name for the transition element with atomic number 73 and is represented by the symbol Ta.

tautomer – Tautomers are organic compounds that are interconvertible by a chemical reaction called tautomerization. Usually, the reaction involves the migration of a hydrogen atom or proton, accompanied by a switch of a single bond and adjacent double bond.

technetium – Technetium is the name for the transition element with atomic number 43 and is represented by the symbol Tc.

tellurium – Tellurium is the name for the metalloid element with atomic number 52 and is represented by the symbol Te.

temperature – Temperature is the property of matter which reflects the quantity of energy of motion of the component particles. There are several scales used to measure this value, such as Kelvin, Celsius, and Fahrenheit.
Common Misspellings: temperture, tempature

tera – Tera is the metric prefix corresponding to 1012. Tera is expressed by the capital letter T.
Example: The average distance from the Earth to the Sun is 149,597,870,700 meters. This is roughly 0.15 Terameters.

teratogen – A teratogen is a chemical that is capable of causing deformities in an embryo.
Examples: Dioxin is an example of a teratogen.

terbium – Terbium is the name for the lanthanide element with atomic number 65 and is represented by the symbol Tb.

terminus – Terminus refers to the end of a polymer molecule.

terpolymer – A terpolymer is a polymer composed of three different mer units.

tertiary amide – A tertiary amide is an amide with three carbon atoms bonded to the amide nitrogen atom. Tertiary amides are often denoted by the shorthand notation of 3° amide.

tertiary amine – A tertiary amine is an amine with three carbon atoms bonded to the amine nitrogen. Tertiary amines are often denoted by the shorthand notation 3° amine.

tetrahedral – Tetrahedral is a descriptor of the geometry of a molecule in which a central atom forms four bonds which are directed toward the corners of a regular tetrahedron. Tetrahedral geometry forms a solid with four vertices and four sides, all of which are equilateral triangles.

tetrel – A tetrel is an element belonging to the Group 14 or IVA group on the periodic table. These elements are also known as the carbon group family of elements.
Examples: carbon, silicon, germanium, tin, lead

tetrose – A tetrose is a monosaccharide compound with four carbon atoms.

Texas carbon – A Texas carbon is the name given to a carbon atom that forms five bonds. The name Texas carbon comes from the shape formed by five bonds radiating outwards from the carbon similar to the star in the Texas state flag. Another popular idea is that the saying “Everything is bigger in Texas” applies to carbon atoms. Although carbon usually forms 4 chemical bonds, it is possible (although rare) for 5 bonds to form. The carbonium ion and superacid methanium (CH5+) is a gas that can be produced under low-temperature laboratory conditions.
CH4 + H+ → CH5+
Other examples of Texas carbon compounds have been observed.

thallium – Thallium is the name for the basic metal element with atomic number 81 and is represented by the symbol Tl.

theory – In the context of science, a theory is a well-established explanation for scientific data. Theories typically cannot be proven, but they can become established if they are tested by several different scientific investigators. A theory can be disproven by a single contrary result.
Also known as: scientific theory, theories
Examples: Big Bang Theory, Theory of Evolution, and Kinetic Theory of Gases

thermal – Thermal is an adjective pertaining to or relating to heat. For example, the thermal properties of a material refers to characteristics relating to heat, such as the ability to absorb or radiate heat.

thermodynamics – Thermodynamics is the scientific study of work, heat, energy, and the related properties of chemical and mechanical systems.

thermometer – A thermometer is a device designed to measure temperature.

thermometry – Thermometry is the scientific study of measuring temperature.

thermoset – A thermoset is a polymer that irreversibly becomes rigid or cures when heated.
Also known as: thermosetting polymer, thermosetting plastic
Example: Vulcanized rubber and fiberglass are thermosets.

thiol group – The thiol group is an organic functional group composed of a sulfur atom bonded to a hydrogen atom. The general formula for a thiol group is -SH.
Also known as: sulfanyl group, mercapto group

Thomson effect – The Thomson effect is the generation or absorption of heat when an electrical current is passed through a material.

thorium – Thorium is the name for the actinide element with atomic number 90 and is represented by the symbol Th.

thr – Thr is an abbreviation for the amino acid threonine. Thr is often further abbreviated as G.

thulium – Thulium is the lanthanide element with atomic number 69 and is represented by the symbol Tm.

tin – Tin is the basic metal element with atomic number 50 and represented by the symbol Sn.
Tinning refers to adding a thin layer of tin to a surface.

tincture – A tincture is an extract of a sample into a solution. Usually, the word tincture refers to an alcohol extract, although other solvents may be used. Tinctures most commonly are used to prepare extracts of plants, such as vanilla, lavender, and cannabis. However, the process also works with animal samples and nonvolatile inorganics, such as iodine or mercurochrome.

titanium – Titanium is the transition metal element with atomic number 22 and is represented by the symbol Ti.

titrant – Titrant is a solution of known concentration which is added (titrated) to another solution to determine the concentration of a second chemical species.

titration – Titration is the process in which one solution is added to another solution such that it reacts under conditions in which the added volume may be accurately measured. Titrations are most commonly associated with acid-base reaction but may involve other types of reactions as well.

trans isomer – A trans isomer is an isomer where the functional groups appear on opposite sides of the double bond. Trans isomers are identified by adding trans- to the front of the molecule’s name.

transmute – To transmute is to change from one form or substance into another different form; to transform or convert.
Example: Changing lead into gold.

triose – A triose is a monosaccharide with three carbon atoms.
Example: Glycerin (C3H8O3) is a triose molecule.

triple bond – A triple bond is three electron pairs which are shared between two bonded atoms. Triple bonds are denoted as three parallel lines in chemical structure diagrams.
Example: A triple bond exists between the atoms of divalent nitrogen, N2.

triple point – Triple Point is the temperature and pressure at which solid, liquid, and vapor phases of a particular substance coexist in equilibrium. A specific case of phase equilibrium.
Example: The triple point for water is at 0.01° Celsius at 4.56 mm Hg.

tritiation – Tritiation is the process of replacing a hydrogen atom in a molecule with a tritium atom. The recommended IUPAC form of tritiation is tritio-de-protiation (replacing 1H with 3H)
Example: The tritiation of fluoroform (CHF3) is CTF3.

tritide – A tritide is the anion of the hydrogen isotope tritium: 3H–.

tritium – Tritium is an isotope of hydrogen containing one proton and two neutrons. Tritium is radioactive with a half-life of 12.32 years. Tritium is often denoted by the symbol T.
Also known as: hydrogen-3, 3H

triton – A triton is the cation of the hydrogen isotope tritium 3H+.

trp – Trp is an abbreviation for the amino acid tryptophan. Tryptophan is also abbreviated as W.

tungsten – Tungsten is the name for the transition element with atomic number 74 and is represented by the symbol W.

tutty – Tutty is an alchemical name for the compound zinc oxide (ZnO).

Tyndall effect – The Tyndall effect is the scattering of light as a light beam passes through a colloid. The individual suspension particles scatter and reflect light, making the beam visible. The amount of scattering depends on the frequency of the light and density of the particles.
Example: The visible beam of headlights in fog is caused by the Tyndall effect. The water droplets scatter the light, making the headlight beams visible.

tyr – Tyr is an abbreviation for the amino acid tyrosine. Tyrosine is also abbreviated as Y.