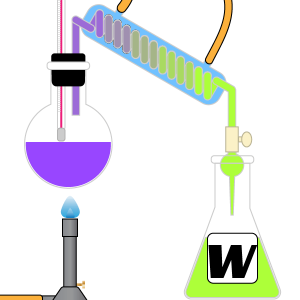 water – Water is a chemical compound consisting of two hydrogen atoms and one oxygen. The name water typically refers to the liquid state of the compound. The solid phase is known as ice and gas phase is called steam.
Also known as: dihydrogen monoxide, hydrogen hydroxide, H2O

water gas – Water gas is a combustion fuel containing carbon monoxide (CO) and hydrogen gas (H2). Water gas is made by passing steam across heated hydrocarbons. The reaction between steam and hydrocarbons produce the water gas mixture. Water gas used in the synthesis of some industrial processes.

water of hydration – another name for water of crystallization.

wax – Wax is a lipid made up of a chain molecule comprised of alkanes or esters derived from alcohols and fatty acids.
Examples: beeswax, paraffin

weak base – A weak acid is a base that only partially dissociates into ions in an aqueous solution.
Examples: ammonia (NH3), ammonium hydroxide (NH4OH), ethylamine (CH3CH2NH2)

weight – Weight is the name of the force exerted on an object due to the acceleration of gravity.

wet – In chemistry, wet is when a surface is coated with a layer of liquid. Wet also applies to a process where water or a liquid is present.

white body – A white body is an idealized material that reflects all incident electromagnetic radiation. White body is the opposite of a black body.

wismuth – Wismuth is an old name for the element bismuth.

witherite – Witherite is the compound barium carbonate (BaCO3) in mineral form. Witherite is sometimes used as a rodenticide.

wolfram – Wolfram is an alternate name for the element tungsten. Wolfram is the origin of tungsten’s symbol, W.

Wood’s metal – Wood’s metal is an alloy consisting of 50% bismuth, 26.7% lead, 13.3% tin, and 10% cadmium by weight. This alloy is used when a low-temperature melting point is needed such as the metal in fire suppression sprinklers. The sprinkler contains Wood’s metal that will melt when exposed to fire and releases the water.

wood spirits – Wood spirits is an old name for the organic alcohol methanol.

would be expressed as

work – Work is the energy required to move an object against a force. Work is equal to the force times the distance the object moves in the direction of the force. The SI unit for work is the joule.

woulfe bottle – A Woulfe bottle is a piece of glassware used to pass gases through a liquid. Woulfe bottles have two or three necks to attach tubing for the gases.