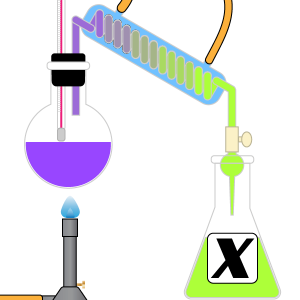 xanthophyll – Xanthophyll is a class of carotenoids that are yellow pigments. Examples: The yellow in fall leaves is due to xanthophyll molecules.

xenobiotic – Xenobiotic is any chemical that would not normally be found in a living organism or be expected to be produced by it.
Examples: organs that are transplanted across species, genes from different organisms, dioxin in humans, antibiotics in humans since we do not produce them ourselves.

xenon – Xenon is an element with an atomic number of 54 and atomic weight of 131.29. It is an odorless inert gas that is used to fill cathode ray tubes.

X group – ‘X’ is used to denote a halogen in the structural formula of a molecule (usually organic).

x-rays – X-rays are light rays with a wavelength from 0.01 to 1.0 nanometers.
Also known as: X radiation

x-ray diffraction pattern – X-Ray Diffraction Pattern is an interference pattern created by x-rays as they pass through a material, such as a crystal.

x-ray tube – An X-Ray tube is a type of cathode ray tube that focuses electrons onto a metal target, thus causing the metal to emit x-rays.