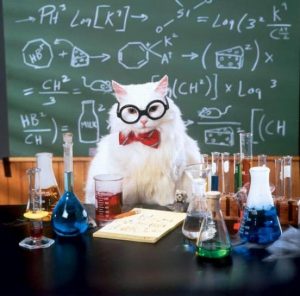 Chemistry Cat isn’t the only one who knows funny chemistry jokes. People do too!

While taking chemistry class isn’t very funny, there are a lot of great chemistry jokes and puns! I started a running list of reader-submitted chemistry jokes over on About.com chemistry, but ran out of room for all the submissions. Here are the rest of the jokes. You’re welcome to post a comment to add a new joke to the collection.

Q: How did the football cheerleader define hydrophobic on her chemistry exam? A: Fear of utility bills.
— Diana

What would you call a clown in jail? — Silicon (Silly Con – yeah, I know)
— Steven

What should do you do with a dead Chemist? Barium!
— John M

My Aunt Was A RichChemist…

When she died, I got all the antimony!

what is h204? It’s FOR drinking and mixing with scotch.
—rouxgknail

Question: What is the name of the molecule CH2O? Answer: Seawater
— chemmie bear

Why did the white bear dissolve in water? Because it was a polar bear.
— Chem Joker

What’s the first thing a teenager does after school? — Radon food in the fridge!!
— yo mamma

A word made only out of chemical symbols

how do you call a tooth suspended in a litre of water? a 1 molar solution
— bianca

Teacher: What is the chemical formula of water? Pupil: HIJKLMO
— chemist3

how does an electron sounds when it falls on the ground? Planck! ( as in Max Planck-founder of the quantum theory )
— antoniopr

a neutron walks into a shop ,”I”d like a ‘coke’,he says The shop keeper serves up the coke “how much will that be?”Asked the neutron “for you ?”Replied the shop keeper,”No charge”
— thanarajt.vidhya

What was Avogadro’s favorite sport? Golf – because he always got a mole-in-one.
— Swanny203

Poor Willie worked in chem lab. Poor Willie is no more. For what he thought was H2O was H2SO4!
—brenangil

Joke Why Chemists Are Great

Why are chemists so great at solving problems? Answer: Because they have all the solutions.
— Anne

Why did the electron walk into a bar? that’s stupid, electrons can’t walk.
— beck

You don’t want to mess with Helium, take away his electrons and he’ll threaten to cause cancer, and he isn’t bluffing.
— Some One

In a glass if we add water and cyclohexane, which will float? Cyclohexane because it exists in boat form.
— Narendra

1 atom says to another atom – I think I’ve lost an electron. Other atom says Are you positive?
— lynn

React with your whole town

The people living here (45.247409,-93.405654) destroy most of their town when they are let out of their houses. A few streets remain unchanged though, like Helium Street NW, where everyone has a squeaky voice.
— LanthanumK

Why did the white bear dissolve in water? Because it was polar!
— caleb

Timmy was a thirsty boy but he will drink no more, for what he thought was H2O was H2SO4.
— Debbie Hunt

sick of the new stuff

I don’t like these new composite materials. I think their boron.
— yes sir

What does a chemist bring as a dessert while camping? A ‘gram’ cracker.
— ironicbonds.com

part of the solution

So Helium walks into a bar and orders a beer, the bartender says, “Sorry, we don’t serve noble gases here.” He doesn’t react.
— Alterverse

A neutrino walks into a bar…he was just passing through.
— Chemistry Cat

Dogs are made up of calcium, nickel and neon (CaNiNe)
— Chemistry Cat

Did you hear about he guy who chilled himself to absolute zero? He’s OK now.
— Chemistry Cat

I heard hamburger has less energy than steak because hamburger is in the ground state.
— Chemistry Cat

I think I just lost an electron, but I’m not positive.
— Chemistry Cat

How much do you make?

Chemistry Cat says “If you don’t mix these chemicals correctly, it could be a cat-astrophe!”
— Chemistry Cat

Chemistry Cat says: Do you want to hear a joke about nitric oxide? NO
—Guest Chemistry Cat

Question: Do you know any Sodium jokes? Answer: Na
— Dar

A chemist and a lawyer

What did the bartender say when oxygen, hydrogen, sulfur, sodium, and phosphorous walked into his bar? OH SNaP!
— chemjokes.

Hydrogen and Oxygen decided to part ways and asked H2O its decision,the reply: i’ll be a universal solvent so as to keep H and O always bonded.
— mary ozoh

Newton, Pascal and Einstein decide to play a game of hide and seek in heaven. Einstein is ‘it’ and closes his eyes and starts to count. Pascal runs off and hides behind a tree while Newton draws a 1 meter square around his feet. When Einstein finishes counting he spots Newton right away and says “Ah ha! Found you and you lose!” Newton replies, “No. you found 1 Newton over a square meter…you found Pascal”
—Guest Dr. Fran

Overheard at the mall

Teen 1: Did you hear oxygen and magnesium got together?? Teen 2: OMg!
—Guest Miss Tasty

Your mama’s so ugly

Your mama’s so ugly…even Fluorine won’t bind to her!
—Guest Joe Mama

Chemistry Cat wants to know: If Schrodinger’s cat walks into a bar…is it there?
—Guest Chemistry Cat

I like to combine carbon, astatine, nickel and phosphorous to make CatNiP.
—Guest Chemistry Cat

Chemistry Cats should not combine carbon, holmium, cobalt and lanthanum and tellurium because CHoCoLaTe is bad for them.
—Guest Chemistry Cat

What do you call a periodic table with gold missing? “Au revoir”
—Guest Chemistry Cat

what do you get when you mix sulfur, tungsten, and silver? SWAG
—Guest swagdemon

why do chemists call helium, curium, and barium the healing elements? Because if you can’t helium or curium, you barium! 🙂
—Guest poopy pants

Someone once asked me if I knew any jokes about Sodium? You know what I told them? Na.
—Guest ChemLover

Two atoms are walking down the street. Says one atom to the other, “Hey! I think I lost an electron!” The other says, “Are you sure??” “Yes, I’m positive!”
—Guest Yo moma

Teacher: describe hydrogen student: is a prostitute element teacher: who taught you that? student: you said it does not belong to a particular group and it reacts with almost all the elements in the periodic table.
—Guest Ezekielsolomon

“Do You want you hear a potassium joke?” “Sure”. “K”
—Guest Tuesday

A neutron walks into a bar and when he tries to pay for his drink the bartender says “for you no charge.”
—Guest Doormat

What do you do with dead chemists? You barium!!!!!
—Guest Science boy

Heisenberg is rushing home in his car. He gets pulled over and the officer approaches his car. “Sir,” he says, “do you know how fast you were going?” Heisenberg replies “No, I do not, but I know exactly where I am.”
—Guest OrrMann

What do you get if you swap the carbon atoms in a benzene ring for iron atoms….. You get a ferrous wheel!!!
—Guest Aa chem

I bet I’ve got a joke you’ve never xenon here before.
—Guest Sweat182

Q: What two elements do sheep belt when happy? A: BaH!!
—Guest Raptor

What is the fastest way to determine the sex of a chromosome? A: Pull down its genes.
—Guest hifolks

Do these protons make my mass look big? (it’s really only funny if you get it the second you read it…)
—Guest Regirl

what comes out when you breathe out 2 helium’s? – HeHe
—Guest Big Daddy G

When a reaction pauses, Ne is a good sport, he puts his neon the ground
—Guest Dturi

If a king farts, is it considered a noble gas? (teehee!)
—Guest gen

Helium chilled himself to absolutely zero degree! He is ok now
—Guest abel

In a court where boron,argon,gallium and indium are judges…….wow just take your case there because you guys would have a great BARGAIN!
—Guest Lukman (alkoxy chemist)

-Hey are you nervous for your basketball game Diamond? -No, I do good under pressure, and when the situation gets hot, it doesn’t phase me.
—Guest Ashley Perlock

Yeah chemists are cool,…we get To do it with models (get it like a chemical model)
—Guest chemswag

I told a chemistry joke today. There was no reaction.
—Guest YungRek

What happens when some mixes Francium, Oxygen, Tungsten, and Nitrogen after it explodes? The chemist may frown.
—Guest Gazelle Legs

chemistry pick up line or joke?

I wish I was DNA Helicase so I could unzip your genes. (;
—Guest lilchemistrrry

Triple date , 2 Guys methane and oxygen and ofcourse the girl hydrogena , Methan whispers to oxygen ‘ Dude , you can have her-.- ‘ , replies ‘you sure? Why? What hapened?? ‘ methane says ‘ Just there is no heat between us , and if there is , I feel she will explode O.O , you know women.. ‘
—Guest just another dude

One thought on “Chemistry Jokes and Puns”