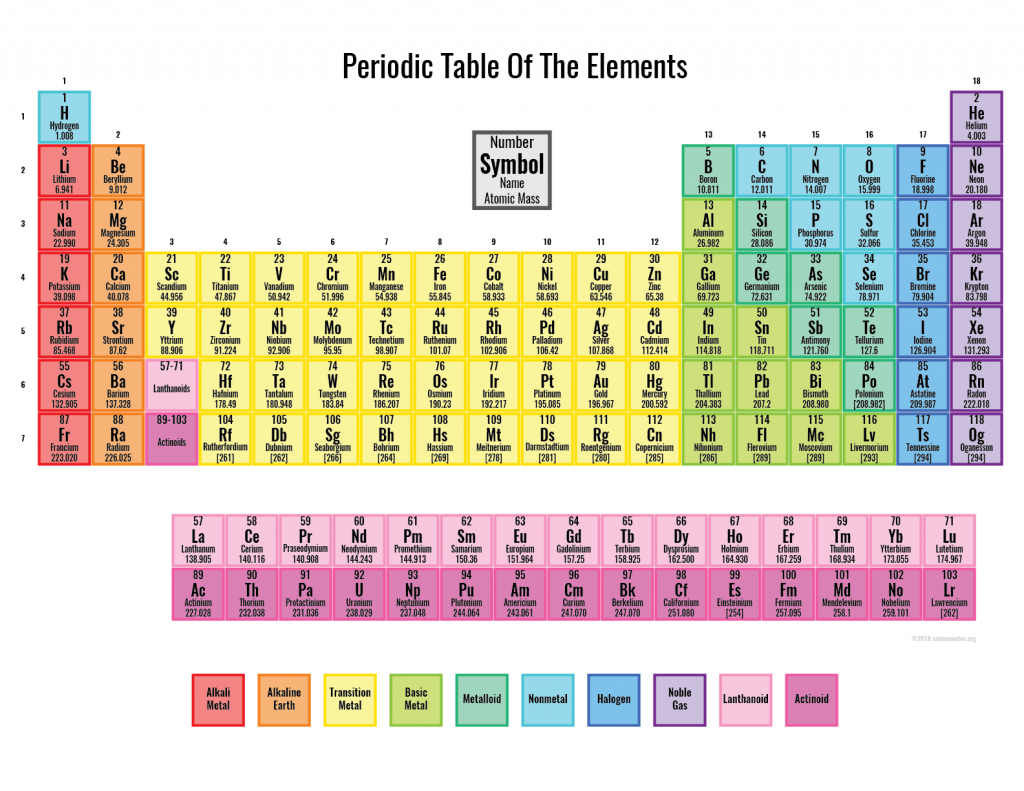 The table contains all 118 known elements and each element’s number, symbol, name, and atomic mass. The color scheme shows the different element groups and is light enough to write in any other useful information or notes you wish to incorporate into the table. It is designed to fit on a single sheet of 8½” x 11″ sheet of paper, but scales nicely to the A4 size. To make printing easier, there is a PDF available. Download the PDF or image using the links below.

This periodic table contains several of the IUPAC (International Union of Pure and Applied Chemistry) suggestions for a proper periodic table.

Since 1988, the IUPAC has recommended the columns be simply numbered from 1 to 18. The older tables used to break the table into A and B sections, dividing the table between filled p and d orbitals (transition metals have partially filled d orbitals.). This division is basically an arbitrary one, so why not just number the columns sequentially.

Another recommendation is the names for the elements from 57-71 and 89-103 to be called lanthanoids and actinoids respectively. This hasn’t really caught on, but it has been incorporated into this table.

Values for atomic mass are overseen by the IUPAC’s Commission on Isotopic Abundances and Atomic Weights (CIAAW). This commission has been meeting regularly since 1899 to adjust the accepted atomic mass values. Their values change as new information is discovered concerning the relative natural abundances between the isotopes of an element. The most recent update was in June 2018 where they changed the values for 14 elements. Most of these changes were minor tweaks in the sixth and seventh decimal place, but the most significant change was for the element argon. Argon’s mass was changed to a range of values [39.792-39.963]. This table contains atomic mass values known as “conventional values” which are more useful to students or anyone else who just need a single value for an atomic mass.