Home » Science Notes Posts » Astronomy » What Does a Comet Smell Like? 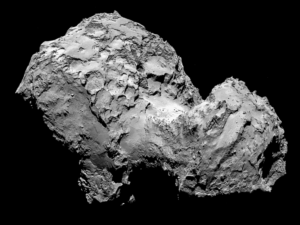 Data from Comet 67P/Churyumov-Gerasimenko or the Rosetta Comet tells us how a comet smells. ESA/Rosetta/MPS for OSIRIS Team

The Rosetta probe made incredible discoveries about comets by taking measurements of  67P/Churyumov-Gerasimenko. Its ROSINA instrument (Rosetta Orbiter Sensor for Ion and Neutral Analysis) included two mass spectrometers that determined how a comet smells. If you think it smells like a dirty snowball, guess again (unless you find that snowball at a toxic waste dump). Here’s a look at how a comet really smells.

CHEMICAL COMPOSITION OF A COMET

The Rosina instrument on the probe learned the basic composition of the coma (halo) of its target comet first. The spectrometers identified water vapor, carbon dioxide, carbon monoxide, ammonia, methane, and methyl alcohol. As the sun heated up the comet, additional volatile compounds were detected, including formaldehyde, sulfur dioxide, hydrogen cyanide, hydrogen sulfide, and carbon disulfide.

HOW A COMET SMELLS

If you could take a whiff of a comet, the “perfume” would give you a headache and might make you sick or dead. Plus, it would smell just plain nasty. The odor would be like a mixture of rotten eggs (hydrogen sulfide), urine (ammonia), almonds (hydrogen cyanide), and a hint of a biology dissection lab (formaldehyde).

Nearly all the chemicals are toxic, so as a protective measure, the human nose can detect these odors at very low concentrations. The presence of hydrogen sulfide and sulfur dioxide would deaden your sense of smell after the initial whiff, so at least it would be a stench you’d get used to… until you passed out.