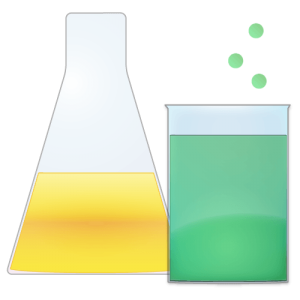 Chemistry is a science which deals a lot with solutions and mixtures. Knowing just how much of one thing is mixed in with a solution is an important thing to know. Chemists measure this by determining the concentration of the solution or mixture.

There are three terms that need to be defined in concentration discussions: solute, solvent and solution.

Solute: The dissolved substance added to the solution.
Solvent: The liquid that dissolves the solute.
Solution: The combination of solute and solvent.

The relationship between these three terms is expressed by many different concentration units. The unit you choose to use depends on how the solution is going to be used in your experiments. Common units include molarity, molality, and normality. Others are mass percent, mole fraction, formality and volume percent. Each unit is explained along with information about when to use them and the formulas needed to calculate the unit.

Molarity is the most common concentration unit. It is a measure of the number of moles of solute in one liter of solution. Molarity measurements are denoted by the capital letter M with units of moles/Liter.

The formula for molarity (M) is

This shows the number of moles of solute dissolved in a liquid to make one liter of solution. Note the amount of solvent is unknown, just that you end up with a known volume of solution.

Molality is another commonly used concentration unit. Unlike molarity, molality is interested in the solvent used to make the solution.

Molality is a measure of the number of moles of solute dissolved per kilogram of solvent. This unit is denoted by the lower case letter m.

The formula for molality (m) is

Molality is used when temperature is part of the reaction. The volume of a solution can change when temperature changes. These changes can be ignored if the concentration is based on mass of the solvent.

Normality is a concentration unit seen more often in acid-base and electrochemistry solutions. It is denoted by the capital letter L with units of moles/L. Normality is more concerned with the chemically active part of the solution. For example, take two acid solutions, hydrochloric (HCl) acid and sulfuric (H2SO4) acid. A 1 M solution of HCl contains one mole of H+ ions and one mole of Cl– ions where a 1 M solution of H2SO4 contains 2 moles of H+ ions and one mole of SO4– ions. The sulfuric acid produces twice the number of active H+ ions as the same concentration of HCl. Normality addresses this with the idea of chemical equivalent units. Equivalent units are the ratio of the number of moles of solute to the number of moles needed to produce 1 mole of the active ion. In our example, this ratio is 1:1 for HCl, both H+ and Cl– ions so the equivalent unit for both ions is 1. For H2SO4, the ratio is 1:1⁄2 for H+ and 1:1 for SO4–. The equivalent unit for H+ is 2 and 1 for SO4–.

Mass Percent, Parts per Million and Parts per Billion

Mass percent or mass percent composition is a measurement to show the percentage composition by mass of one part of a solution or mixture. It is most often represented by a % symbol.

The formula for mass percent is

where A is the part needed and the total is the total mass of the solution or mixture. If all the mass percent parts are added together, you should get 100%.

If you think of mass percent as parts per hundred, you can make the leap to the units of parts per million (ppm) and parts per billion (ppb). These two units are used when the solute’s concentration is very small compared to the volume measured.

The formula for parts per million is

and parts per billion

Note the similarity between mass% and these two equations.

Volume percent is a concentration unit used when mixing two liquids. When pouring two different liquids together, the new combined volume may not be equal to the sum of their initial volumes. Volume percent is used to show the ratio of the solute liquid to the total volume.

Mole fractions are often used when discussing mixtures of gases or solids, but could be used in liquids. Mole fraction is denoted by the Greek letter chi, χ. The formula to calculate mole fraction is

Formality is a less common concentration unit. It appears to have the same definition as molarity with the formula:

In solutions where the solute does not dissociate, such as sugar in water, the molarity and formality are the same.

One thought on “Concentration Units For Solutions”