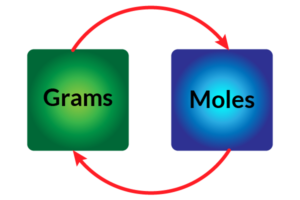 Convert grams to moles and moles to grams.

Converting grams to moles is a problem that occurs when a measured amount of mass is known but the ratio for balanced reactions is needed. These two example problems show the best way to convert grams to moles and moles to grams of a molecule.

First, we need to know how many grams are in 1 mole of CO2. This is done by finding the molecular mass of CO2. CO2 has 1 carbon atom and 2 oxygen atoms. Looking at the periodic table, we can find the atomic mass of both carbon and oxygen.

This means there are 44.0 grams in one mole of CO2. Use this value as a conversion factor to find the number of moles of CO2 in our problem.

This setup of the conversion factor cancels out the grams, leaving the mole unit we need.

Question: What is the mass in grams of 4.80 moles of hydrogen peroxide (H2O2)?

Just like the first example, we need to know the molecular mass of hydrogen peroxide. H2O2 has two hydrogen atoms and two oxygen atoms.

To convert grams to moles or moles to grams:

The most common place an error is likely to occur is setting up the conversion factor incorrectly. Check to make sure the correct unit cancels out.