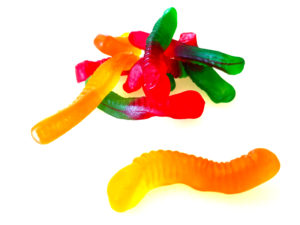 The secret to turning gummy worms into Frankenworms is the baking soda and vinegar chemical reaction.

Frankenworms are gummy worm candies that seem to move with a zombie life of their own. Making the worms dance is a fun science experiment, perfect for Halloween. The project uses candy, baking soda, and vinegar, so it’s safe enough for young children.

There’s nothing magical about gummy worms except their long shape. You can try animating licorice or other long, skinny candies. Gel-type candies work best because they absorb the baking soda faster.

The Science of How It Works

The same reaction that makes a baking soda and vinegar volcano erupt brings gummy worms to “life”. Baking soda (sodium bicarbonate) and vinegar (dilute acetic acid) undergo a chemical reaction that produces carbon dioxide gas. The gas bubbles form on the surface of the worms. As more and more carbon dioxide molecules group together, larger bubbles form. Big bubbles are lighter than vinegar, so they make the worms rise. If bubbles become large enough to break away from the worm and rise on their own, that part of the worm sinks back down.