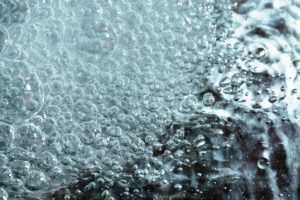 Do you know what happens to the temperature of water boiling in a pot on high heat? It’s a common science question, particularly for tests, because knowing the answer shows how well you understand the process of boiling. The answer is the water reaches its boiling point temperature and stays there.

But, whatever the boiling point is, when water reaches it and undergoes a phase transition into water vapor (steam), the temperature stops rising. You can crank the heat as high as you like. The water may boil more vigorously and convert into steam more quickly, but it won’t get hotter. In fact, at the microscopic level, there may be cooler regions of boiling water. When vapor bubbles form near a heat source, like at the bottom of a pot, the gas bubbles insulate the water from the heat. It’s not a big deal for home cooking, but is an important consideration for industrial applications.

Water Hotter Than Boiling Point and Colder Than Freezing Point

Liquid water can be hotter than 100 °C (212 °F) and colder than 0 °C (32 °F). Heating water above its boiling point without boiling is called superheating. If water is superheated, it can exceed its boiling point without boiling. You may have firsthand experience with the phenomenon, as its fairly common when microwaving water. Water that is very pure, free of air bubbles, and in a smooth container may superheat and then explosively boil when it’s disturbed.

Freezing water below its freezing point without freezing it into ice is called supercooling. To experience this, put a container of bottled water into a bowl of ice. Bottled water works better than tap water because it’s typically purified (distilled or reverse osmosis) and contains a minimum of particulates and dissolved air. Small particles act as nucleation sites to promote freezing. Add salt to the ice to lower the temperature. The temperature of the bottle of water can drop below the freezing point, but the water won’t turn to ice until you pick it up and disturb it.

Once water freezes into ice, the ice can be cooled all the way down to absolute zero. When water vaporizes into steam, the steam can be heated up to the point where water breaks apart into its component atoms. At 3000 °C, about half of water molecules decompose into hydrogen and oxygen.