Can Drinking Bleach Help You Pass a Drug Test? 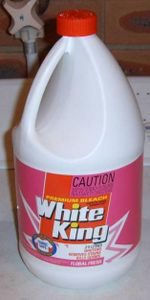 There are all kinds of rumors about ways you can beat a drug test. Obviously the easiest way to pass the test is to avoid taking drugs in the first place, but that’s not going to be much help if you’ve already taken something and are facing a test. According to Snopes, some people drink bleach believing it will somehow clear their system of drugs. While it is unclear where this idea originated, the rumor is out there. Will it work? Will drinking bleach hurt you or kill you? Here’s the lowdown:

Household bleach consists of about 5.25% sodium hypochlorite in water. Specifically, Clorox says their bleach contains water, sodium hypochlorite, sodium chloride, sodium carbonate, sodium hydroxide and sodium polyacrylate. They also make scented products that include fragrances. Bleach also contains small amounts of impurities, which aren’t a big deal when you’re using the product for disinfection or cleaning, but could prove toxic if ingested. None of these ingredients binds to drugs or their metabolites or inactivates them such that you would test negative on a drug test.

What Happens If You Drink Bleach?

So, of course you are wondering what happens if you drink bleach. People have done this and lived to tell the tale. Drinking a small amount of bleach won’t kill you, particularly if you dilute it in water, but it is corrosive and can irritate or damage your mucous membranes and esophagus. Ingesting a few milliliters of bleach most likely will irritate your eyes, nose and throat and may cause nausea and vomiting and possibly diarrhea. Vomiting a small amount of bleach is not recommended, since this re-exposes your esophagus to the chemicals and may worsen the damage. Drinking a larger volume of bleach can hurt or kill you. The toxicity results from the chlorine gas that is produced, the corrosivity of bleach and ingestion of sodium (hypernatremia). Chest pain, low blood pressure, shock and possibly coma or death may result from either inhaling too much bleach or drinking it.

Drinking bleach won’t help you pass a drug test and may make you sick or dead.

Have you tried drinking bleach to pass a drug test? You’re welcome to post a reply to share your experience.

Comments
David says:
I hadn’t heard the blech myth but I had heard of vinegar. Any chance? I never believed it but then I never needed to worry about it.

stoner says:
Bleadh works in small small amounts if dilluted and with a good drink to wash it down

Nick420 says:
the stoner is correct. dont chug, just about 4 driples into some carbonated dark pop. indeed it does work. but only in a light dosage. cant stress that enough. after that drink a gallon of water. do all of this the day befor your test.

Jay says:
It works!!! One cap x one half gallon does the trick, just be sure to use bathroom once before the test and the next load should be ok. Remedy has worked three times for me.

mar says:
hey stoner, will this method work with proxies

Jae says:
You people have the intelligence of a circus monkey. Actually, scratch that….I’m sure a circus monkey would be smart enough not to drink bleach. IDIOTS….

Whitedog says:
Who in their right mind would ever drink bleach??
Cant you just put a few drops into the urine thats being tested

Silhouette says:
Are you people especially dense or something. The woman just said don’t try it at all because it can make you extremely ill or even kill you and here you all still go giving the desperate saps of the world ways to attempt to get around the inevitable. I mean why bother? If you took drugs in the first place then you don’t value your brain or body much anyway! So go ahead, try it! Listen to the addicts of the world and drink one teaspoon of bleach per half gallon of water. While we’re all watching your sad story on the news shaking our heads about the new craze, your family will either be making medical or burial arrangements for you.

Hollywood says:
Well I jus, drank it n hope I dont die hope I passs my test too

Myra says:
Silhouette, you’re right.Maybe those who said that its still ok to drink bleach are an addicts. Anyway,for sure,they are old enough for them to know what’s good and what’s bad to health. If they took dangerous drugs, knowing that it’s harmful, then why avoid bleach knowing it’s also harmful?
Guys do you love your mom? then give value to yourself? Your mom didn’t carried you in a womb for 9 months then just to kill yourself.
Life is a gift!

ARCpoint Labs of Columbia says:
All bleach would do is give you a false reading. It would not get you off the hook. Not to mention, who would want to risk the potential health problems.

brandon says:
DO NOT DRINK THE BLEACH
why do people think that’s what the bleach method is?!?!
you put it in the vial after you pee in it!

Branden says:
Will I die from drinking bleach

MattRed says:
Hey IDIOTS drinking the gallon of water a day before and almost up to the test day is what’s making you clean…. I HIGHLY doubt its the bleach LOL!!!!!! When you drink the gallon of water you are essentially urinating the water because your body is trying to get rid of the water overload. How or why bleach would work is beyond me because you need to time when the bleach would be passed through the urine and even then who says bleach would clean your urine from the inside? I would imagine the bleach would be gone right away and absorbed and contained somewhere in the human body never even making it to your bladder. It is also possible it could be removed from your body as stool. Especially in small amounts….. Just because you drink something it does not mean your body would automatically push it out as urine.This is pretty stupid! Just don’t do drugs. Or at least be smart and stop while being tested, or just drink water only, TONS of it.

MsJaye Willz says:
If you drink tons of water then you will look obvius becus then it will only show tht ur hydrated but also ur urine will lose coloring duhh ur jus pushing it out and refiltering it but bleach works also. everybody have there own method but the only thing tht matters is who pass it…. now stop blowin down cus sum people prefer to use bleach.

h2eartz says:
i dipped my toothbrush in bleach to whighten my teeth swollowd some with my spit by accident. Im fealing tingle fealing in both arms they are weak and cant make a fist all the way when i do feel like throwing up sleeping all day watery eyes nausious dizzy fealing loss of apetite. i think im die fealing sick i called poison control the lady said i will feal tingle fealing in my arms but she said im not goin to die!! i will be visiting the doc today cus their has to be something to clean me out now so i can go on with my normal life.

star says:
i drank bleach and it wiped out I MEAN EVERTHING EXCEPT A FAINT LINE OF CRACK

Trevis says:
I jus drank a very small amount of bleach diluted with water an passed a drug test

Mommy74 says:
How about not doing drugs while you are looking for a job, knowing that any respectable company will give you a drug test when they want to hire you? If you really want a job, quit smoking for couple of weeks and you don’t have to be an idiot and drink bleach!

jmc says:
I’ve drank a capful in a glass of chocolate milk and passed just fine never drinking any water at all.

DaveO says:
I smoked pot just before I had to take a drug test . I drank a gallon of water also before the test and passed the test… water is the best way to pass a drug test… drink water till you pee water…. works every time.

DaveO says:
I have a friend that mixed milk with bleach and says she passed the drug test with coke weed and zanex in her system I try to tell her to not do that. But she swears that it works.. 🙁

haley says:
this is a lie!!! you CAN pass a drug test by drinking bleach. i put two or three drops in a glass of water and passed my urine test. i only had pot in my system tho. idk if it works for anything else. but i DO know it works.

izzy blackberry says:
R u guys idot bleach dose not help u pass a drug test it will just case u damege in later life like drugs will so stop with th f**king drugs ok and bleach isn’t going to get u anywere so if ur on drugs get a life and go get help insted of covering it up if ur on drugs test u need help not bleach just get bloody help

Sweet Jesus says:
There are some g***mn idiots on this page.

former stoner says:
Hey dumba%%es saying you will be suspicious if you piss water in a drug test. just eat peanut butter and it will put color back in your piss. and you will be fine