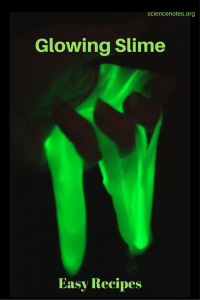 It’s easy to make glow in the dark slime. Here are several recipes and tips for getting the brightest glow.

What’s better than slime? Glowing slime, of course! There’s more than one way to make glow in the dark slime that really glows (not just under black light). Here are easy recipes to try and tips to get the best glowing effect.

Tips for Getting the Brightest Glow

There key to bright glowing slime is using a good glow product. The very brightest glow comes from using glow powder. Green, aqua and blue glow much brighter and longer than any of the other colors. You can get glow powder

If you can’t find glow power, glowing acrylic paint is the next best choice because the particles are coated so they won’t be affected by water in the slime. Most glow paint glows green, even if the “paint” appears a different color. If it glows another color, it won’t be as bright as the green.

The easiest option is to use glowing glue. This works well in the slime recipes that use glue as an ingredient because enough product is used to see the glow effect. Glowing glue is not worth trying in other slime recipes. It doesn’t glow as brightly as glow powder or paint, so if you use it, you might want to add more “glow” from another product.

The weakest glow comes from using glow glitter. Glow glitter adds a cool effect, but it won’t be very noticeable, especially if you add food coloring or other dye to the slime. You can add glow glitter to any recipe for a little added glowing sparkle.

Borax and Glue Glow in the Dark Slime

This is a good recipe to use glow glue in place of the regular glow. If you do this, you can omit glow paint or powder, unless you want to enhance the effect.

Here again, you can swap out the glue for glow in the dark glue and then add more “glow” or not, as you wish. 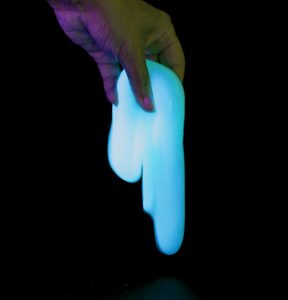 Use tonic water in place of water in slime recipes to get slime that glows blue under a black light.

How to Make Glow Water for Slime