An elastic collision is a collision where total momentum and total kinetic energy is conserved. 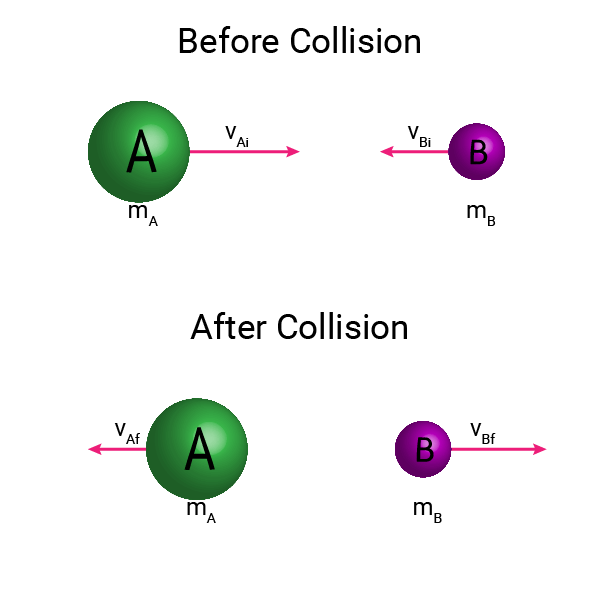 This illustration shows two objects A and B traveling towards each other. The mass of A is mA and the moving with velocity VAi. The second object has a mass of mB and velocity VBi. The two objects collide elastically. Mass A moves away at a velocity VAf and mass B has a final velocity of VBf.

Given these conditions, textbooks give the following formulas for VAf and VBf.

These two equations are often just presented in this form in the textbook with little or no explanations. Very early in your science education, you will encounter the phrase “It can be shown …” between two steps of mathematics or “left as an exercise for the student”. This almost always translates into “homework problem”. This “It can be shown” example shows how to find the final velocities of two masses after an elastic collision.

This is a step by step derivation of these two equations.

First, we know total momentum is conserved in the collision.

Factor out the masses

Let’s call this Equation 1 and come back to it in a minute.

Since we were told the collision was elastic, the total kinetic energy is conserved.

Multiply the entire equation by 2 to get rid of the ½ factors.

Rearrange the equation so the like masses are together.

Factor out the common masses

Use the “difference between two squares” relationship (a2 – b2) = (a + b)(a – b) to factor out the squared velocities on each side.

Now we have two equations and two unknowns, VAf and VBf.

Now we can cancel out most of this

Now we have one of our unknowns in terms of the other unknown variable. Plug this into the original total momentum equation

Now, solve this for the final unknown variable, VBf

subtract mAVBi from both sides and add mAVAi to both sides

factor out the masses

Divide both sides by (mA + mB)

Now we know the value of one of the unknowns, VBf. Use this to find the other unknown variable, VAf. Earlier, we found

Plug in our VBf equation and solve for VAf

The common denominator for both sides is (mA + mB)

Now we’ve solved for both unknowns VAf and VBf in terms of known values.

Note these match the equations we were supposed to find.

This was not a difficult problem, but there were a couple spots to trip you up.

First, all the subscripts can get tangled up if you aren’t careful or neat in your handwriting.

Second, sign errors. Subtracting a pair of variables inside parentheses will change the sign on BOTH variables. It is all too easy to carelessly turn – (a + b) into -a + b instead of -a – b.

Last, learn the difference between two squares factor. a2 – b2 = (a + b)(a – b) is an extremely useful factoring trick when trying to cancel something out of an equation.