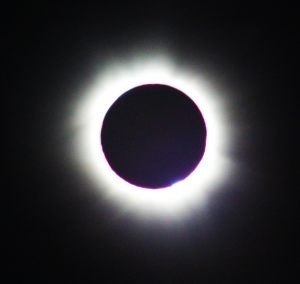 Coronium is a name given to an element scientists thought they had discovered in the Sun’s corona. (Anne Helmenstine)

Have you ever heard of the element named coronium or newtonium? Coronium is the name given to an element that 19th century scientists believed might exist in the corona of the sun. Researchers observed an unidentifiable green line in the spectra of the solar corona, which is visible during a total solar eclipse. Charles Augustus Young and William Harkness independently observed a green emission line at 530.3 nm during the August 7, 1869 solar eclipse. This line did not correspond to the emission spectra of any known element, so the name coronium was proposed as the source of the color.

Dmitri Mendeleev, known for developing the periodic table, proposed the name newtonium rather than coronium for this element. Mendeleev believed newtonium was an element slightly lighter than hydrogen. We now know hydrogen, containing a single proton, is the simplest element, but atomic structure was not understood in Mendeleev’s time.

It wasn’t until the 1930s that  Walter Grotrian and Bengt Edlén determined the mysterious green spectral line observed during solar eclipses was due not to some unknown element, but to highly charged iron, Fe13+. Highly charged metal ions are responsible for other previously unidentified lines in the solar spectra, too.