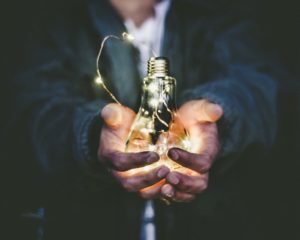 Light is one form of energy. (Riccardo Annandale)

Energy is defined in science as the ability to do work. It is a scalar physical quantity. Although energy is conserved, there are many different types of energy, such as kinetic energy, potential energy, light, sound, and nuclear energy. One form of energy may be converted into another without violating a law of thermodynamics.

When energy is “lost”, it means the energy can’t be recaptured for use. This usually occurs when heat is produced. Losing energy doesn’t mean there is less of it, only that it has changed forms.

The term “energy” comes from the Greek word energeia or from the French words enmeaning in and ergon which means work. The usual unit of energy is the joule (J), where 1 J = 1‎kg⋅m2⋅s−2.

There are many different forms energy can take. Here are some examples: