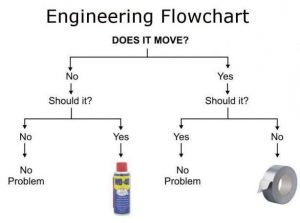 Engineering is a line of work where mistakes can be costly on many levels. You would think engineers are a serious bunch of people, but there are an awful lot of engineer jokes out there. Here is a list of some of my favorite engineer jokes. Feel free to share yours in the comments if you have a good one.

Definition of an engineer: Someone who solves a problem you didn’t know you had, in a way you don’t understand.

Engineering is all about laziness in the name of better life.

Arguing with an engineer is a lot like wrestling in the mud with a pig. After a few hours, you realize that he enjoys it.

Q: Why do computer engineers get Halloween and Christmas mixed up?

An engineer is a fellow that takes a measurement with a micrometer, marks it with a crayon, and cuts it with an axe.

During the French Revolution, three men were condemned to the guillotine. One was a preacher, one was a doctor, and the third was an engineer. When the preacher approached the deadly machine, he requested to be beheaded while lying on his back so that he could die while looking into Heaven. The doctor and the engineer thought that to be a good idea and requested the same. As the blade plunged down the track toward the preacher, it suddenly stopped just short of the man’s neck. The executioner declared it an Act of God and let the man go free. The same thing happened to the doctor. As the engineer laid his head back in place he suddenly said, “Oh wait! I see the problem!”

A wife asks her engineer husband, “Could you please go shopping for me and buy one carton of milk, and if they have eggs, get 6!”
A short time later the husband comes back with six cartons of milk.
The wife asks him, “Why in the world would did you buy 6 cartons of milk?”
He replied, “They had eggs.”

A programmer and an engineer were sitting next to each other on an airplane. The programmer leans over to the engineer and asks if he wants to play a fun game. The engineer just wants to be left alone, so he politely declines, turns away, and tries to sleep.

The engineer grins and agrees to play. The programmer asks the first question, “What is the distance from the earth to the moon?”

The engineer doesn’t say a word and just hands the programmer $5.

The engineer asks the programmer, “What goes up a hill with three legs and comes down on four?” The programmer looks thoughtful, takes out his laptop and starts to surf the net for the answer. After an hour he wakes the engineer to hand him $50. The engineer takes the money, turns away, and tries to go back to sleep.

The programmer asks, “Well? What’s the answer to the question?”

Without a word, the engineer reaches into his wallet, hands $5 to the programmer.

One engineer spots the conductor coming and they all duck into the bathroom. The physicists were puzzled.

The conductor came aboard, said, “Tickets, please,” and got tickets from all the physicists. He then went to the bathroom and knocked on the door and said, “Ticket, please.” The engineers stuck the ticket under the door. The conductor took it and moved on. A few minutes later, the engineers came out of the bathroom. The physicists felt really stupid.

On the return trip, the physicists decide they should try the engineer’s scam. They bought one ticket for the whole group. They met up with the engineers in the same car.

The physicists all smile and wave their lone ticket.  This time, the engineers have no ticket. One engineer nods towards the door between cars and says, “Conductor coming!”. The engineers sat back as all the physicists locked themselves into the bathroom.

After a moment, one engineer knocks on the bathroom door and says, “Ticket, please.”

A physicist, a mathematician and an engineer were each asked to establish the volume of a red rubber ball.
The physicist immersed the ball in a beaker full of water and measured the volume of the displaced fluid.
The mathematician measured the diameter and calculated a triple integral.
The engineer looked it up in his Red Rubber Ball Volume Table.

Most people believe “If it ain’t broke, don’t fix it!”

Two engineering students were walking across a university campus when one said, “Where did you get such a great bike?”

The second engineer replied, “Well, I was walking along yesterday, minding my own business, when a beautiful woman rode up on this bike, threw it to the ground, took off all her clothes and said, “Take what you want.”
The first engineer nodded approvingly and said, “Good choice; the clothes probably wouldn’t have fit you anyway.”