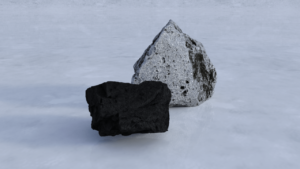 Calculate the atomic mass of the elements boron and magnesium.

The easiest way to find the atomic mass is to look it up on a periodic table. The atomic mass for each element is given in atomic mass units or grams per mole of atoms. This value is the average atomic mass of the element. This is because elements may have more than one naturally occurring isotope.

Example: Find the element copper (Cu or element number 29) on the periodic table. The atomic mass is listed as 63.546. This means the average mass of a mole of copper atoms is 63.546 grams.The average is important since there are two different natural isotopes of copper: Copper-63 and Copper-65. Copper-65 has two additional neutrons than copper-63 and therefore has more mass.

The average is important since there are two different natural isotopes of copper: copper-63 and copper-65. Copper-65 has two additional neutrons than copper-63 and therefore has more mass. The average mass of copper takes account of the natural abundance of each isotope of an element. Copper-63 accounts for just under 70% of all copper found in nature. The other 30% is copper-65. These abundances are used to calculate the atomic mass value found on the periodic table.

How to Calculate Atomic Mass From Natural Abundance Example

This example will show how to find the average atomic mass of an element when given the natural abundance of each of the element’s isotopes.

What is the atomic mass of magnesium?

This value agrees with the value of 24.305 given on the periodic table.

How to Calculate Natural Abundance from Atomic Mass

A common homework problem involves finding the natural abundance of isotopes from the atomic masses of the isotopes and the element’s atomic mass.

Answer: Set up the equation the same way as the previous example.

Now our problem is we have too many unknowns. Since we’re working with percent abundances, we know the combined total of the abundance is equal to 100%. In decimal form, this means

Plug these values into the above equation

Multiply both answers by 100% to get the percent abundance of each isotope.