Fluorine is the ninth element of the periodic table. These fluorine facts contain chemical and physical data along with general information and history. 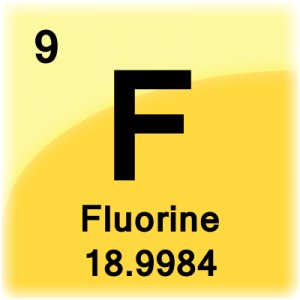 Discovery: Henri Moissan in 1886
Fluorine was known to exist for many years. As early as the mid 1500s, fluorite minerals were added in metallurgy to reduce the melting points of metals. Hydrofluoric acid was used by 18th Century glassmakers to etch glass. No one was able to isolate this elusive element. In 1886, French chemist Henri Moissan finally perfected a technique to isolate pure fluorine gas. Moissan would earn the 1906 Nobel Prize in Chemistry for this feat.

Name Origin: Fluorine is named from an acid made from fluorite mineral known as fluoric acid. Sir Humphry Davy proposed the name of the unknown element in the acid fluorine. fluoro- from the acid and -ine because it had properties of a halogen.

Natural fluorine has one stable isotope:  19F.  18 known radioactive isotopes have been produced under laboratory conditions ranging from 14F to 31F.

19F
Fluorine-19 is a stable isotope containing 10 neutrons and a natural abundance of 100%. 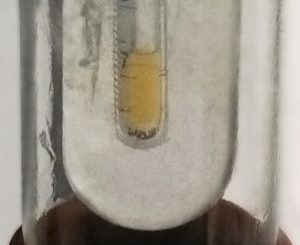 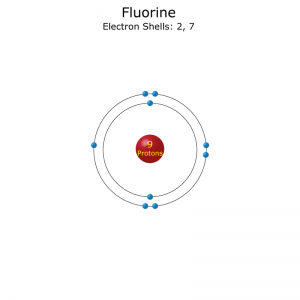 Electron configuration of a fluorine atom.