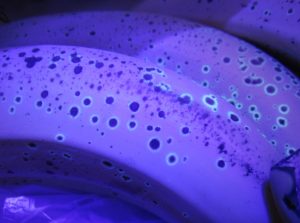 Bananas are one of the foods that glow under black light. Only the margin of the spots glows. (endolith)

Do you want food that glows in the dark? With the exception of certain types of phosphorescent fungi, edibles don’t tend to glow. However, there is some food that glows under a black light. The black light emits ultraviolet radiation, which excites atoms and causes them to release fluorescent light. Fluorescence is a fast process, so food only glows when the black light is on.

Here is a list of foods that glow and the color of the light that is produced. Tonic water glows the brightest. You can use it in place of water in certain recipes to make foods light up. Try it in white frosting, gelatin, and drinks. You can also add a bright glow to food by mixing in vitamin B2.

Most white foods (except for egg whites) don’t glow or fluoresce under black light, but they do reflect back the light so they appear bright blue or purple. Examples of reflective foods include:

If a food doesn’t glow, consider serving it on a white doily or fluorescent plastic plate. Fluorescent plastic cups are available in many colors. Most clear plastic has a blue glowing edge under black light. You can also decorate using glow sticks. Just make sure they stay sealed!

Take a look at people’s reactions to glowing food. As you might guess, adding vitamins or tonic water to food can affect the flavor. Food usually glows green or blue, which might not seem that appetizing. It’s fun though!