In a previous example problem: Friction Example Problem – Sliding Down An Inclined Plane, I showed how to find the coefficient of kinetic friction of a block sliding down an incline plane.

This friction example problem shows how to find the coefficient of static friction using the same methods.

Problem:
A block of weight w sits on a level surface. One end of the surface is slowly raised until the block is just about to move down the ramp. What is the coefficient of friction between the block and the ramp’s surface?

Solution:
This is the force diagram showing the forces in play on the block and ramp.

The normal force N is perpendicular to the surface of the ramp. The frictional force Ff acts parallel to the ramp’s surface and resists the motion of the block. The weight w pulls vertically down. The angle formed between the level ground and the ramp’s surface just before the block moves is φ. 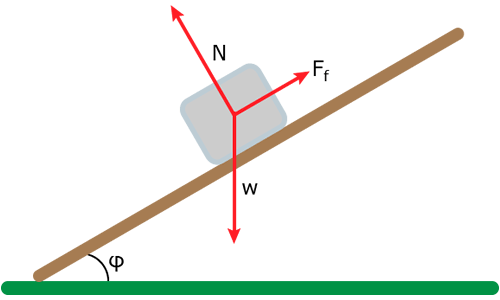 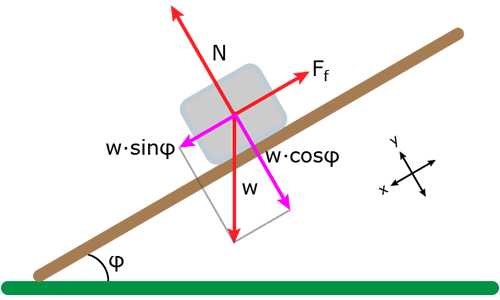 The sum of the forces in the x-direction is:

The force of friction Ff = μN. Since the block is right on the verge of moving, the μ we use is the coefficient of static friction: μs.

The system is on the verge of motion, but it’s still not in motion. This means the forces are in equilibrium and the total force is equal to zero. Substitute 0 for ΣFx.

Let’s leave this part for now. For the next part, find the sum of the forces in the y-direction. Since they too are in equilibrium, the sum will equal zero as well.

Now that we have a value for the normal force, plug it into the equation we got from the x-direction forces.

Answer:
The coefficient of static friction is the tangent of the angle the surface is lifted just before the block begins to move.

For more about friction force, coefficients of friction and another example problem, look at this link: Friction Example Problem – Physics Homework Help.