Friction is the resistance force generated between two bodies as they move across each other. It is proportional to the force that presses the two bodies together. This diagram shows the forces acting on a block sitting on a surface. 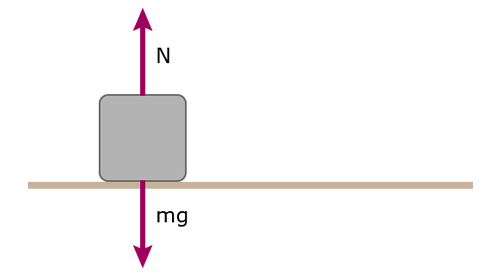 The block is pulled down onto the surface by the force of gravity while the surface pushes back in an equal and opposite force known as the normal force: N. Note there are no horizontal forces. If a horizontal force is applied such as pushing the block to the right, the block will begin to accelerate. 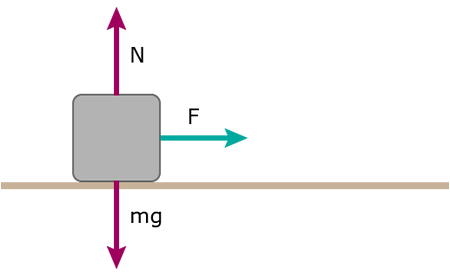 Experience tells us this does not always happen. If you try to push something heavy, it doesn’t always move until you’ve pushed HARD enough. There must be a force working in the opposite direction of the push to resist the motion. 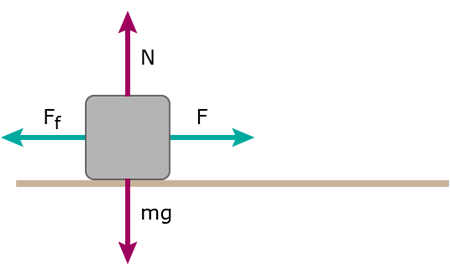 This force is the force of friction, Ff.

The coefficient of friction depends on two factors.
The first depends on the materials the two objects are made of. It is generally easier to move 50 kg of ice on a glass surface than a 50 kg stone on sand. Each two materials have their own coefficients of friction.
The second factor is whether or not the block is moving. You may have noticed it is usually easier to move a heavy object once it is already moving. This means there are two different coefficients of friction. One for when the block is stationary, μs (static) and one for when the block begins to move, μk (kinetic). 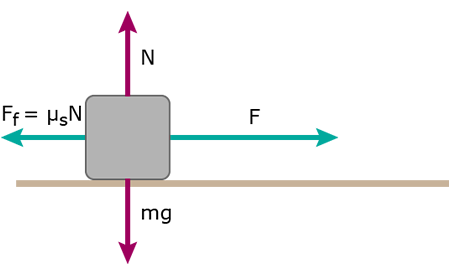 The static coefficient is used whenever the block is stationary. As the force pushing the block increases, it will eventually reach a point where the block is on the verge of moving. The coefficient of static friction, μs is experimentally determined by carefully measuring the force at this point. The frictional force required to reach this point is F = -μsN. The minus sign indicates the direction of the force. Frictional forces oppose the force trying to move the object and act in the opposite direction. Any magnitude of force less than musN, the block will not move. 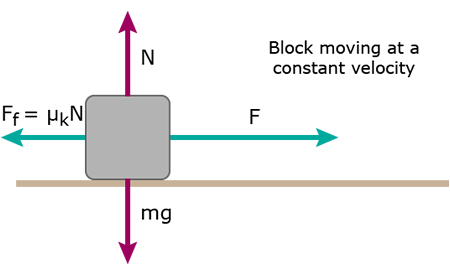 When the block is moving, the coefficient of kinetic friction is used. This value is experimentally calculated by measuring the force necessary to keep the block moving at a constant velocity. This force will equal -μkN.

For the coefficient of static friction, we need the force needed to get the block moving. In this case, 80 N.

From the description above:

N is equal to the weight of the block, so N = 200 N. Put these values into the formula.

For the coefficient of kinetic friction, the force needed to maintain a constant velocity was 40 N. Use the formula:

There are two important things to remember in friction homework problems. The first is the normal force N is always perpendicular to the surface. The normal force is not always ‘up’. The second is the friction force works opposite in direction to the motion of the block. Friction is a resistive force.