The “block sliding down an inclined plane” is a common first year homework problem dealing with friction. This problem is a relatively simple example problem but can be made even easier with a trick. While it isn’t an Earth shattering trick, it does not always occur to the new physics student. This worked solution of this classic problem uses that trick.

Problem:
A mass of weight w sits on a level surface. One end of the surface is raised until the block begins to slide down the ramp at a constant velocity. What is the coefficient of friction between the block and the incline plane?

Solution:
This illustration shows the forces at work when the block is in motion. 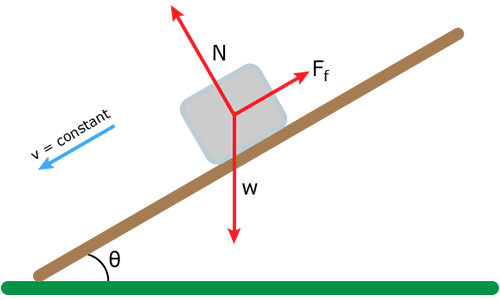 The normal force N is perpendicular to the surface of the ramp. The frictional force Ff acts parallel to the ramp’s surface and resists the motion of the block. The weight w pulls vertically down. The angle between the ground and the ramp’s surface is θ.

Now for the trick. Most students will immediately make their coordinate system parallel to the ground (up-down, left-right). You can save yourself a lot of trigonometry if you choose to align the coordinate system with the incline of the ramp and the positive x direction is down the ramp. See, not Earth shattering like I said, but extremely useful in simplifying the problem. Now our forces can be broken up into x- and y- components. 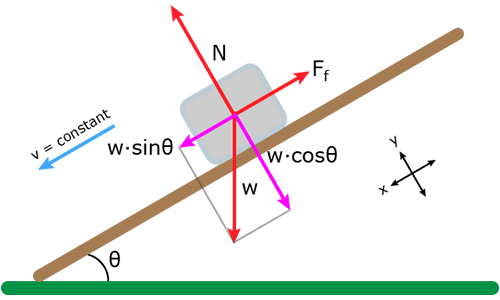 In the x-direction, the sum of the forces are:

We know the force of friction Ff = μN. Since the block is moving, the μ we use is the coefficient of kinetic friction: μk.

Since the system is in equilibrium (constant velocity) the sum of all the forces is equal to zero.

Now for the y-direction. Again the sum of the forces is equal to zero.

Plug this solution into the result we got from the x-direction.

For more about friction force, coefficients of friction and another example problem, look at this link: Friction Example Problem – Physics Homework Help.