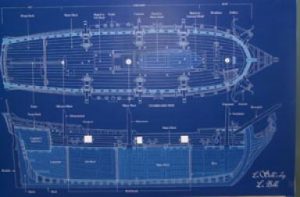 A blueprint is a paper-based reproduction of a technical drawing in which the white drawing appears on a blue background. Blueprints are made using the cyanotype process. Franklin M. Jones, U.S. Department of State

A blueprint is a paper-based reproduction of a drawing, usually a technical drawing, such as an architect or engineer would use. Blueprints use the cyanotype process that was invented by the astronomer John Herschel in 1842. The paper (or vellum or plastic) is coated with a solution of two soluble iron(III) salts – potassium hexacyanoferrate(III) (potassium ferricyanide) and iron(III) ammonium citrate. The two iron salts do not react with each other in the dark, but when they are exposed to ultraviolet light the iron(III) ammonium citrate becomes an iron(II) salt. The iron(II) ion reacts with the potassium ferricyanide to form an insoluble blue compound, KFeFe(CN)6·H2O. This compound is blue ferric ferrocyanide, also known as Prussian blue.

How Blueprints Are Made

A blueprint starts out as a black ink sketch on clear plastic or translucent tracing paper. The ink sketch is laid on top of a sheet of blueprint paper and exposed to ultraviolet light (e.g., placed in sunlight). Where the light strikes the paper, it turns blue. The black ink prevents the area under the drawing from turning blue. After exposure to UV light, the water-soluble chemicals are washed off the blueprint, leaving a white (or whatever color the paper is) drawing on a blue background. The resulting print is light-stable and as permanent as the substrate upon which it is printed.