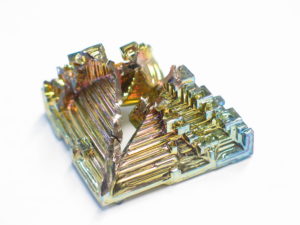 Bismuth crystals are one of the easiest and most beautiful metal crystals to grow. These crystals are known for their rainbow colors that are caused by the oxide layer that forms on the metal. Bismuth crystallizes into an intricate geometric “hopper” form.

You only need a few basic materials for this project. Basically, you need bismuth, metal containers for melting and crystallizing the element, and a heat source.

Where to Get Bismuth

Bismuth isn’t something you pick up at the grocery store, but it’s available if you know where to look. I ordered mine off Amazon. You can also use non-lead fishing sinkers or non-lead ammunition. Fishing weights and ammunition should state they are made of bismuth. If you order the element online, I recommend reading user reviews to see if the purity is suitable for crystallization. There aren’t a lot of other uses for the pure element, so it’s pretty simple to find what you want.

The element is not very expensive, plus once you get a sample that works, you can re-melt it again and again until you get exactly the crystal form you want.

How to Grow Metal Crystals

Many people are familiar with how to grow sugar or borax crystals. Metal crystals are different because you don’t dissolve the metal in a solvent. Basically, you just melt it and slowly cool it to promote crystal formation. 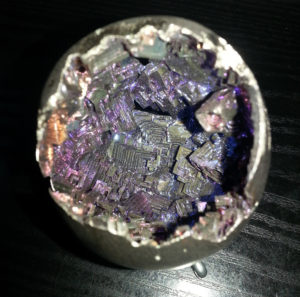 Your first attempt to grow bismuth crystals will probably look something like this. (Image: aatze78)

The melting point of bismuth is low for a metal (271°C or 520°F), so it will melt under high cooking heat, while a steel or aluminum container will remain solid. When the bismuth melts, the impurities in your sample separate out and mostly float. You can pour the molten metal away, leaving an element pure enough to crystallize. But, if you just melt the metal and let it solidify (freeze), the pretty crystals will be inside the solid. So, you let the bismuth start to crystallize and then pour the excess liquid away to expose the part you want.

Another option is to remelt the metal and use a silicone bowl as the second container. If you do this, be careful! The melting point of silicone is only slightly higher than that of bismuth, so there is a chance the silicone may liquefy. Be sure there is a pan under it to catch the metal in case this happens.

It’s a good idea to wear gloves, eye protection, and covered shoes, in case you spill the hot metal and it splashes. This is common sense for any project involving heat.

Bismuth is considered a heavy metal, but it’s much less toxic than most (hence its use in Pepto-Bismol). It’s still not something you want to intentionally ingest, so it’s best to use metal containers only for this project and not for food. The crystals are generally considered safe to handle and to display.