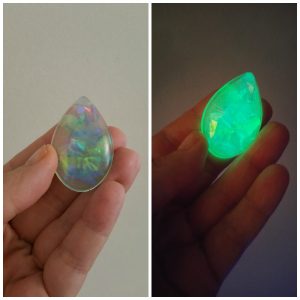 Yes, I made up the word “fauxpals”. Writers make up words all the time 🙂 This is a super-simple tutorial for making glow in the dark opals out of resin. You don’t have to make them glow, but it’s a cool effect, so why not?

There are two big benefits to these jewels, aside from the glowing aspect. (1) Unlike regular opals, they won’t eventually lose their water and thus their opalescence and (2) These are way less expensive! True opals will cost you a mint. They are a naturally soft gemstone, so you don’t lose utility using resin instead of natural silicate.

Glow in the Dark Opal Materials 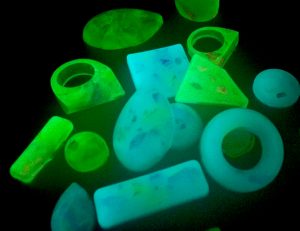 You can use any resin you like, so long as you keep its properties in mind during the project. Primarily you’ll be interested in the resin’s clarity, working time, and viscosity. I used Clear Cast via Amazon

because I like that it’s crystal clear and that I can work with it for several minutes before it gets too thick.

I use little plastic medicine cups and coffee stirring sticks to mix the resin and inclusions. Use whatever works for you.

With the resin I used, cellophane works for this project because it stays suspended in the resin. That produces a nice three-dimensional iridescence. I tried iridescent and holographic glitter, but they were too dense and always sank to the bottom of the shape. This is problem because it makes the “opal” look flat and because it reduces the amount of light that gets to the phosphorescent powder. Some glitter isn’t color-safe in the organic solvent, so the color may run off or react unpredictably. I’m not saying you can’t use glitter, but if you do, you need to watch the viscosity of the resin and wait to pour it when it’s thick enough to suspend the particles.

Phosphorescent (glow) powder also comes in different sizes. Large particles glow brightly, but sink in resin. Look for a fine powder for this project, which produces a uniform glow throughout the opal, not just on one surface. I like the day neutral powders, which appear translucent in ordinary light. If you use a colored powder, your opal won’t be as clear or glow as brightly. Green, aqua, and blue powders glow the most brightly, so they are preferable to other colors. I’d avoid red, orange, or any of the zinc sulfide powders because they are opaque. 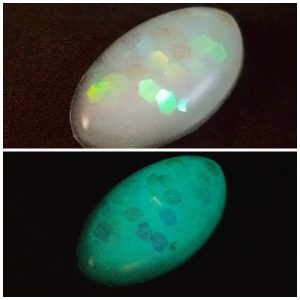 Alright, so I said it’s super-simple. Basically, you mix resin, add cellophane and glow powder, pour the resin, and you’re done! However, you can save yourself some pain and suffering if you read through these tips before you start.

What To Do With Glow in the Dark Opals

I’ve used the technique to make cabochons for jewelry and crafts, paperweights, and a pretty night light for my bathroom. You can use cellophane in the glowing ring project to add more daytime interest to that item. I think fauxpals would make pretty suncatchers and holiday ornaments. What are your ideas?