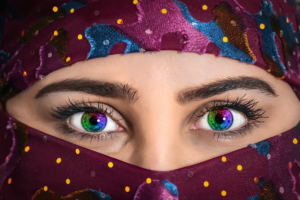 Impossible colors are colors the human brain can perceive that the eyes can’t ordinarily see.

Close your eyes and imagine the color bluish-yellow — not green, but a color that appears both blue and yellow at once. Can you imagine reddish-green? If you mixed red and green paints, you’d end up with a brownish color rather than a color that you’d describe as both red and green. Blue-yellow and red-green are examples of forbidden or impossible colors. These are colors the human eye can’t see, yet the brain can perceive.

There are two types of impossible colors:

The reason the human eye can’t perceive these colors is because signals from the rods (light-dark) and cones (red, green, blue) interpret signals in an antagonistic manner termed the opponent process. Scientists believe there are three opponent channels:

For each opponent channel, the retina receives signals for one color in a pair, but not both at once. So, you can perceive a signal as blue or yellow but not blue and yellow.

How to See Impossible Colors

Hewitt D. Crane and Thomas P. Piantanida devised a test in 1983 that allowed some observers to see colors that weren’t in the CIE 1931 color spaces (mathematical relationships that linked wavelengths of light to perceived colors). The test consisted of either a vertical red stripe adjacent to a vertical green stripe, an alternating field of red and green stripes, or else blue and yellow stripes. An eye tracking device followed the observer’s vision so that mirrors could keep the boundaries of the stripes in the same position on the eyes retina. Because the images maintained their position, some cells received red light at the same time other cells received green light (or blue versus yellow). The goal was to cause the visual cortex of the brain to perceive colors as flowing into each other.

A similar test may be viewed on televisions and monitors: 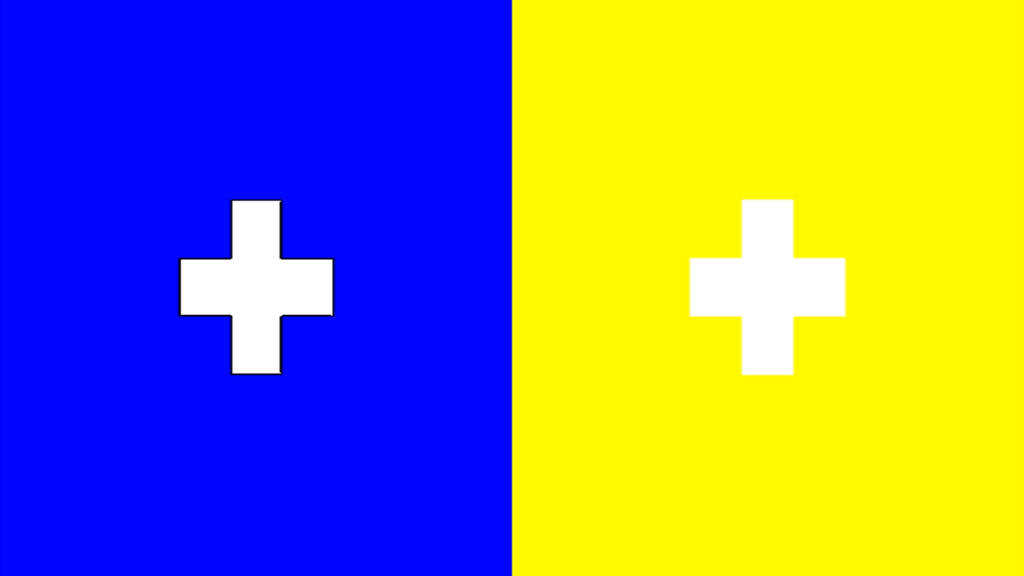 To take the test, slightly unfocus or cross your eyes to stack the two “plus” signs on top of each other. What color do you see?

Intermediate Rather Than Impossible?

In 2006, Po-Jang Hsieh and his colleagues at Dartmouth College repeated the 1983 experiment, but gave participants a color map and asked them to identify the color produced by the alternating stripes. Viewers identified intermediate colors (e.g., a muddy brown for reddish green). Why were the results different? It could be the participants in the 1983 test simply didn’t have the vocabulary to name intermediate colors.

Or, it could be impossible colors exist and the 1983 and 2006 experiments were flawed. A 2001 experiment conducted by Vincent A. Billock, Gerald A. Gleason, and Brian H. Tsou was similar to the other experiments, but the two colors were controlled so that they were the same luminance. In their study, some subjects perceived colors not found on a color map. Basically, at this point scientists don’t agree on the validity of impossible colors, but their existence has not been ruled out.

Impossible or forbidden colors aren’t the only colors the brain can see although the eye cannot produce them from the visible spectrum. For example, chimerical colors are imaginary colors that may be seen by looking at a strong color until cone cells become fatigued and then looking away. Looking toward a white object results in an afterimage composed of the complementary color. However, the opponent process may explain other surprising colors.

Examples of three types of chimerical colors include:

Can you see the chimerical colors? Stare at the first image, then glance at the image to its right. While the “approximate rendering” blocks show you what to expect, the colors you see will be much more interesting! 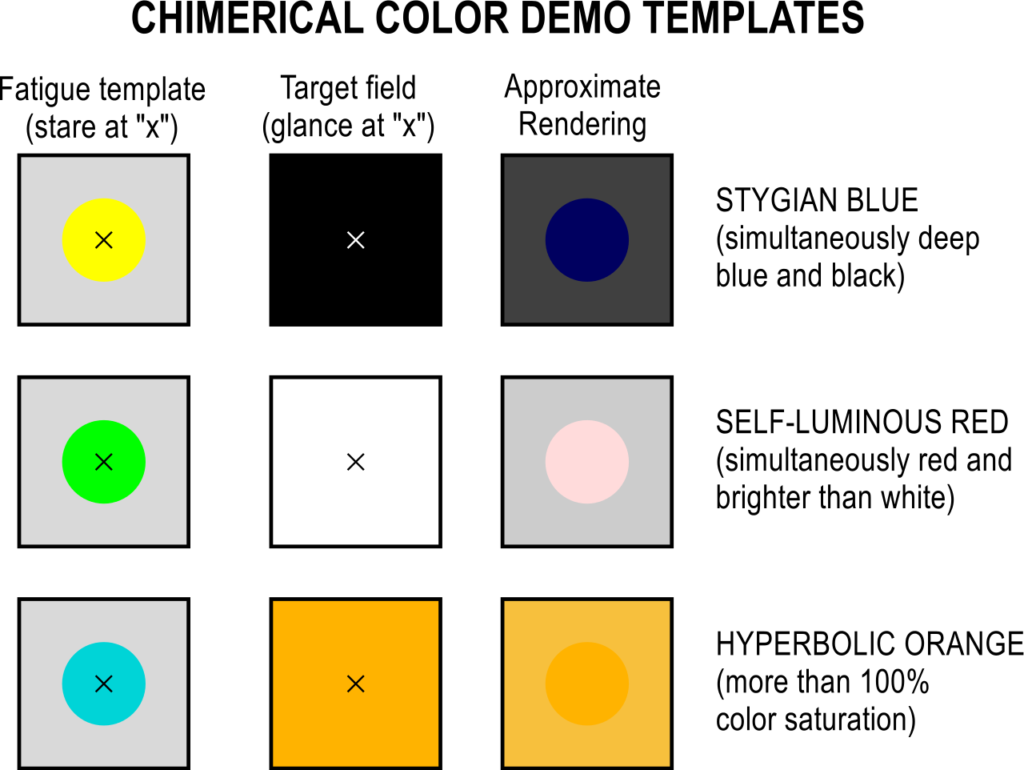 If you’re still confused or don’t understand how impossible colors work, this video shows how your eye decides between red and green or between blue and yellow.